THE GHOST NEXT DOOR ~ A FEAST FOR THE SIXTH SENSE .... review

It is nice to see that Todd Severin and the gang at Ripple Music, a label that has built its reputation on releasing music of a more hard rock/stoner bias, are still sending feelers out into more diverse and angular territories. Ripple Music first stepped out of their comfort zone when they released "Human Collapse" by postapocolyptic French rockers Los Disidentes del Sucio Motel and have since dipped their toes into the doomic arena with Sweden's Vokonis, sludgy stonerized prog with France's The Necromancers and Mediterranean flavoured psychedelia with Cyprus's Arcadian Child. Ripple's dalliance with rock of a more alternative nature continues with their latest signings The Ghost Next Door, Gary Wendt: (guitars/vocals), Aaron Asghari: (guitars), Sebastien Castelain: (drums) and Noah Whitfield: (bass), a quartet from Berkeley, California who describe what they do as "a desire to marry the dark melancholy of 80s and 90s alternative with the aggression and drive of Bay Area metal". Let's see if their new album "A Feast For the Sixth Sense" lives up to that statement. 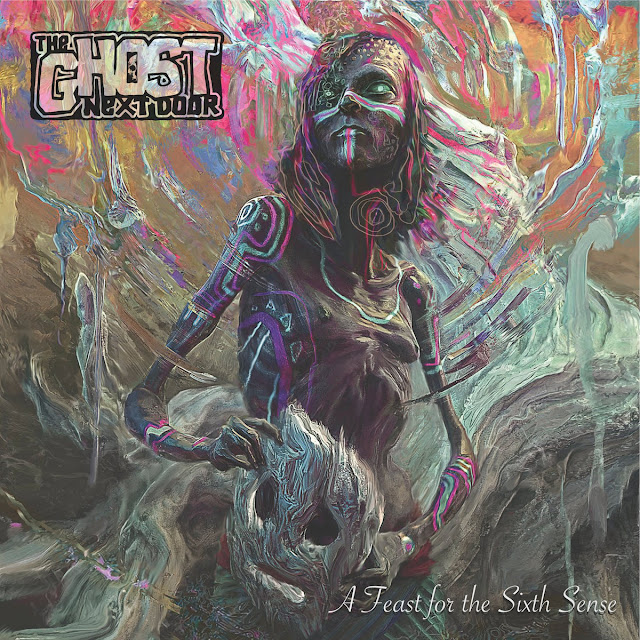 It is hard to pin down, just by listening, what influences have shaped The Ghost Next Door's sonic output as there is just so much going on here, both as a whole and as individual tracks, on paper the band list among their influences everything from Rush to The Cure so we are talking a broad musical spectrum here. What is evident, when listening to the bands debut, is that TGND are not a band who are bound by the rules of genre, grunge/alt. metal aesthetics, doomic density, prog complexity and sludgy stoner fuzziness either get a walk on part or lead the cast throughout the albums eight songs (ten if you buy CD or digital) and keep the listener on tenterhooks as to where any song may go at any given moment. Making comparisons to other bands in order to gain a reference point on TGND's sound is almost next to useless as no sooner are you convinced a song  has a touch of Alice In Chains type slurry grunginess in its groove than it suddenly takes off on some prog(ish) excursion or drops down into sludgy doomic dankness. Vocally things are no less diverse with Wendt changing tones like some people change moods, crooning clear, clean and mellow one minute bellowing bearlike and bellicose the next, never giving less than 100% in either mode
Exciting, innovative music should not be defined by a label or tag and there has not been either invented yet that could even come close to describing the grooves The Ghost Next Door bring to the table with "A Feast For The Sixth Sense", the best Desert Psychlist can come up with is STUNNING! 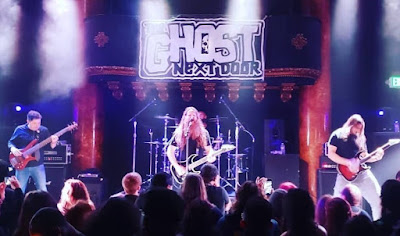 "A Feast For The Sixth Sense" is a fine addition to Ripple Music's increasingly varied catalogue and one by a band for whom  the word "varied" is probably the most fitting and apt.
Check it out …..