Many of us, who spend hours sitting in front of a keyboard staring at a monitor, trying to convey to others our love of this or that album, have secret yearnings to be rock stars, many of us will have an instrument of some sort or other sitting around gathering dust in the hope that one day.... one day we may just summon up the courage to step out from behind the PC and onto a stage and live the dream.
Chris Latta, writer at Indy Metal Shows, has done just that , the bassist/vocalist with Indiana bluesy doomers Spirit Division has managed to find a balance between writing about music and actually playing it.
Spirit Division have, since their inception in 2013, gone through a number of line up changes, starting as a quartet for their 2014 "Demo" then settling as a trio for their first full length 2015 album "Spirit Division", a format the band have stuck with for this their latest release "No Rapture". 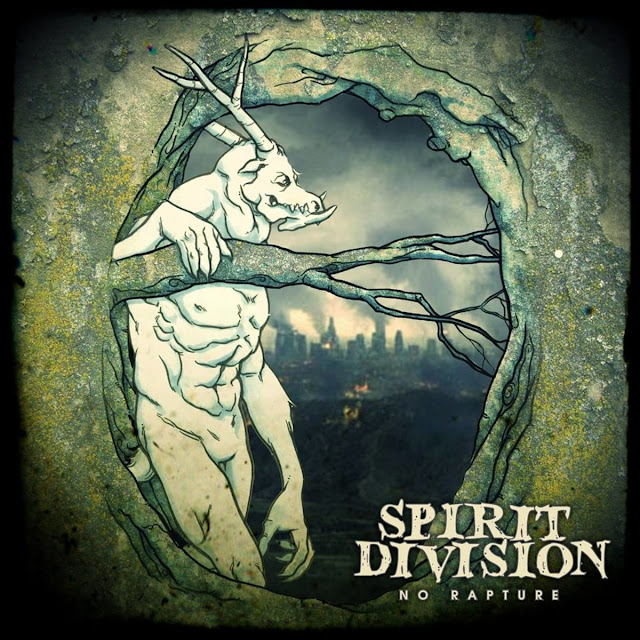 "No Rapture" sees Spirit Division continuing with the blues tinted metal edges of their previous work but taking a firmer grip on the doomier elements that have always been at the core of their sonic onslaught.
"Whispers In The Embers" emphasises this shift with its "epic" doom feel channelling the spirits of Altar of Oblivion and Gates of Slumber through its "gothic" toned vocal deliveries and its use of atmosphere and space.
Title track "No Rapture" sees the return of the bands bluesier side albeit wrapped in a blanket of  darkly fuzzed stoner doom. Latta and guitarist Stephen Hoffman trade off on the songs vocals and the two different tones competing and coming together is a stroke of genius that gives the songs groove a delicious element of "swing".
"When The Sun Explodes" opens with a few bars of Hoffman laying down a catchy circular riff unaccompanied before Jace Epple's drums and Latta's gnarly bass join in and the vocals begin.
With more hooks than a school cloakroom, part power metal, part stoner/desert and with a touch of early Hawkwind in it's totally addictive groove. this is the track that will remain with the listener long after the album is finished.
"Rewinding Life" begins with a backward taped effect then explodes into a stuttering stoner groove overlayed with angst riddled lyrics sang with an almost punkish aggression from Hoffman. Big shout goes out here to Epple who lays down a furious backbeat for Latta and Hoffman to lay their riffs over
"A Dark Request" comes out of the starting blocks on a wah drenched Hoffman guitar motif underpinned by Latta's and Epples tight rhythmic pulses. Hoffman handles the main vocals here with  with Latta on backing vocals, the two a perfect foil for each other The vibe created here is very much that of 70's hard rock yet there are elements of late 80's desert as well as more metallic 90's stoner that can also  be found among these grooves.
"The Mourning Song" is an instrumental piece that mixes a little psych in with the heavy. Hoffman peels off some seriously good solos over a throbbingly heavy bass, line supplied by Latta,  under which Epple once again proves his worth with another solid display of percussive power and finesse.
"Wendigo" closes the album pretty much the way it started, with another foray into the realms of epic/traditional doom. Latta handles the main vocal and sings a tale of searching for,finding and becoming a mythical beast set against a backdrop of pounding drums, dark powerchords and rumbling bass, replete with the requisite time signatures and tempo changes that make up any good doom song, and this is a good doom song!

Slightly schizophrenic but highly enjoyable "No Rapture" shows a band who are not gonna be tied down to one specific genre or sub-genre, a band who wear their diversity like a badge of honour, saying to the world this is what we do ...deal with it
Check 'em out,,,,,


Note*
Since the albums release Stephen Hoffman has left the band his place has now been taken up by Andrew Bowerman
Posted by Desert Psychlist at 09:13