Three piece Australian psychonauts Comacozer will be no strangers to those of us who spend too many hours scrutinizing the stoner, psych and doom pages of Bandcamp, the band have been a first stop shop for quality instrumental music since the release of their "Sessions Demo" in 2014. The band  followed this with two further releases, "Deloun" (2015) and "Deloun Sessions"  a compilation of the two previous  EP's released the same year. This year (2016) sees the band releasing their first full length debut album "Astra Planeta" via Dutch label Headspin Records. 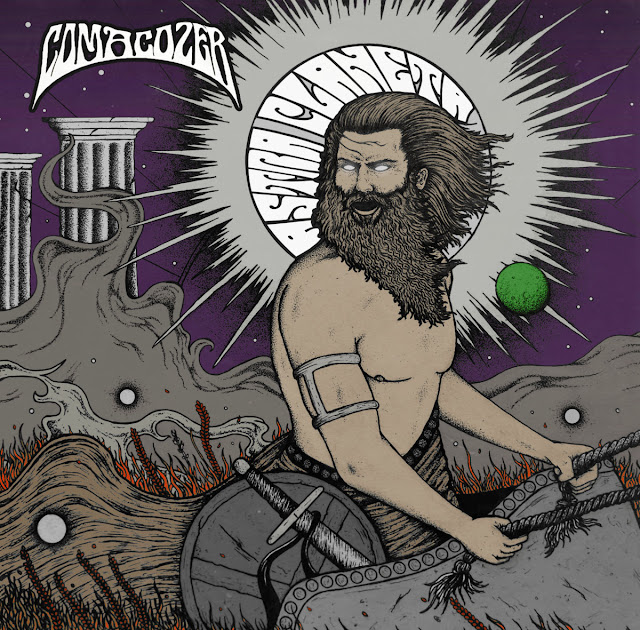 Comacozer, Rick Burke (Guitar), Richard Elliot (Bass) and Andrew Pana (Drums), have with their new album raised the bar for instrumental rock to an all time high. Packed to the brim with eastern mysticism, spacey ambience and gnarly stoner riffage the five songs, that populate "Astra Planeta", take the listener on a series of sonic journey's around the Cosmos returning to Earth only fleetingly before taking off again in another direction. Middle Eastern/North African themes run through "Astra Planeta" like blood runs through a vein seasoning each and every song with rich exotic flavours, flavours that are further enhanced by the high levels of musicianship the three members bring to the table. Burke uses his guitar like a light sabre cutting through the grooves created beneath him by Elliot and Pana like a knife through butter, using an array of effects from his pedalboard to fill every nook and cranny with subtle textures and vibrant colourings, imitating sitars one minute, soaring like a bird on an Earthless type psych wigout the next. Beneath this sterling display of six string magnificence Elliot's bass buzzes and thrums with a deep creamy resonance, the bassists loose almost funky delivery an integral component in Comacozer's sonic armoury. Pana's solid percussive backbeat is the platform from which the two guitarists take off into their flights of lysergic madness but that is not to say the drummer is just a journeyman making up the numbers, far from it, he is the anchor that secures the groove  but he is also the tiller navigating and directing that groove. The band are not afraid to experiment with more traditional instrumentation either as can be witnessed on the eclectic and Arabian tinted "Navigating The Mandjit" with its use of the bouzouki-like baglama, (a six-string Hellenic instrument with a mandolin type tone), and the use of tablas and darbukas (a Middle-Eastern goblet shaped drum usually held under the arm). The band can mix it up to, blending into their jams elements from a variety of differing musical sources, gnarly stoner/psych  (Saurian Dream), tranquil and ambient space (The Mind That Feeds The Eye), desert funk (Illumination Cloud) and lysergic desert doom (Hypnotized by Apophis), all played with a level and intensity that at times is breathtaking!
Check 'em out..

Posted by Desert Psychlist at 18:17