"Two wrongs don't make a right" was something our mothers would often tell us when we had done something wrong and we were trying to fix that wrongness by doing something equally as wrong, Spinning that old adage around you could also say that two V's don't make a W either.. except in the case of Australian combo VVARP where maybe they do!
VVARP, John Bollen (guitar/vocals); Claudia Sullivan (bass/vocals) and Scott McLatchie (drums), are a doomic trio hailing from Melbourne whose grooves sit primarily at the stoner/occult end of the doomic spectrum yet are not adverse to wading knee deep into more traditional waters, as the bands debut "First Leviations" (Iommium Records) will attest to. 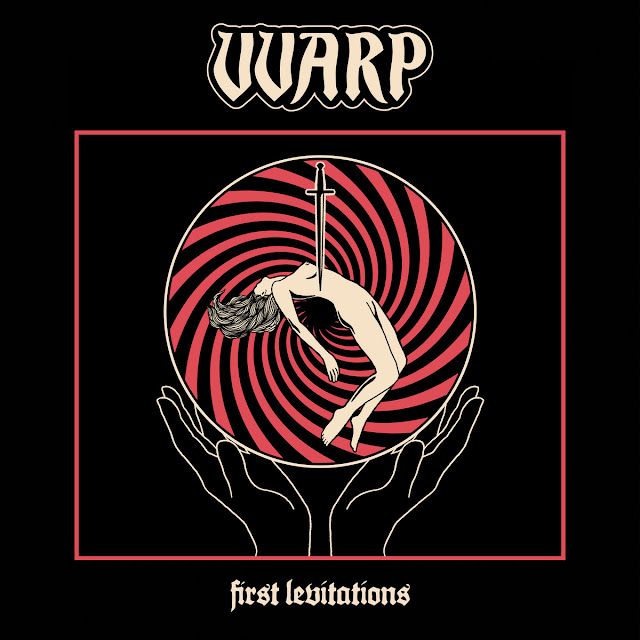 As Desert Psychlist has stated before that atmosphere is a major factor in the doom's overall appeal and VVARP's "First Levitations" does not lack atmosphere, in fact you could say that this is an album literally dripping with the stuff!  When we speak of "atmosphere" in the context of doom music we tend to jump to the conclusions that we are about to hear something that is slightly menacing and possibly terrifying but this is not the case with "First Levitations", VVARP prefer not to concern themselves with trying to scare the living daylights out of their listeners but attempt to convey the more spiritulistic/ritualist aspects of the genre. Don't however get us wrong there are plenty of dark, dank guitar and bass refrains and thundering percussion to be found on songs like "Wizard's Sister", "Flames at Dusk" and "Hypnototem" to please even the most hardened doom aficionado but the coupling of these musical elements with the monastic/Gregorian style vocal harmonies they are decorated in takes everything to another level and gives the albums overall vibe an almost cinematic feel, the band creating music that could easily grace the soundtrack of some Lovecraft or Wheatley inspired occult themed movie.

Brooding, moody and deliciously dark  VVARP's "First Levitations" is a must for fans of  Windhand, Dead Sacrements and Chile's Heráldica de Mandra but also for anyone who likes their doom sounding as if it was being performed in a candle lit altar beneath an upturned cross at the stroke of midnight!
Check it out ......