Those who have seen the documentaries "Slow Southern Steel" and "NOLA Underground Music Documentary" will already know that underground bands hailing from "The South" have a reputation for jamming grooves that are heavy, intense and LOUD, levels of intensity and heaviness matched only by some of  the more extreme bands hailing from the equivalent scenes of Scandinavia and Poland. Why this is the case is addressed in part by the interviews featured in "Slow Southern Steel" but we at Desert Psychlist like to believe that there is just a certain "dark magic" flowing in the skies and waters of the Southern States that lends itself to music of a heavier intense nature.

New kids on the NOLA block Leafdrinker, E. Cole (bass): L.Condes (drums) and J. Romagosa (guitar/vocals), have managed to tap into that "dark magic", their dark doomic grooves containing all the requisite levels of swampiness and dankness you would come to expect from a metallic band hailing from "the south" but at the same time also cleverly putting their own unique spin on things.  The bands new album "Nausea", their second, does not only draw from the deep well of their southern heritage but also cherry-picks from further afield, the band blending a little Seattle flavoured grunge and European psychedelic doom into the mix to keep things fresh and interesting... and if that's not enough to grab your attention then the fact that they have also tied these musical threads together into a "concept" should! 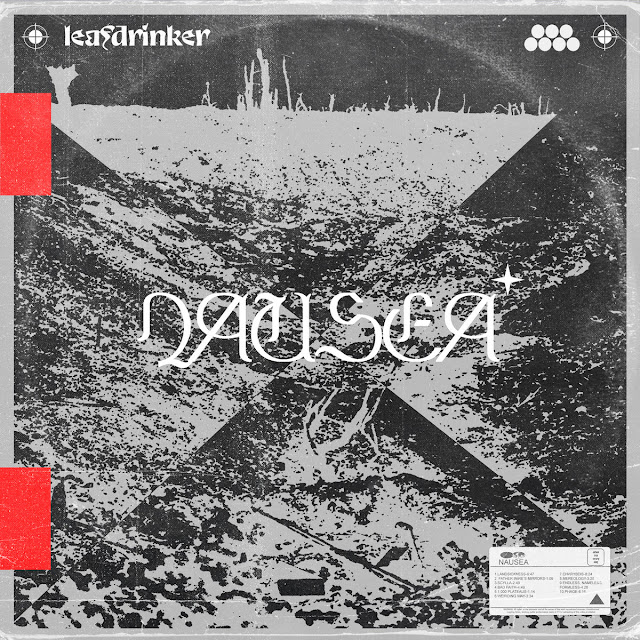 "Landsickness" kicks things off and already that "European" element of Leafdrinker's sound makes its presence felt with the band dropping into a low(ish), slow(ish) doomic groove overlaid with monastic toned vocals that has similarities to those sludgy dynamic onslaughts brought to bear by Poland's Dopelord and Denmark's Center of the World, thick glutenous guitar tones, pummeling percussion and a bass sound that rumbles rather than growls. "Father Inire's Mirrors" follows and is a short instrumental built around a recurring bass and guitar riff that among other things highlights Condes drumming skills. Almost immediately we are hurled into "Scylla" a thundering mid-tempo song that despite its obvious heaviness carries a little Alice In Chains slurred grunginess in its attack and finds Romagosa pitching his vocals a little more melodic and cleaner. "Bad Faith" opens with Coles bass rumbling and Romagosa picking and strumming the strings above the nut of his fretboard before Condes slams down the percussive hammer and the song erupts into a crunching stoner metal groove fractured with post rock textures and lysergic colourings."1,000 Plateaus" is another of those instrumental interludes and serves as an intro into "Weirding Way" a song that really throws the spotlight on Leafdrinker's grungy/alt-rock leanings, the band experimenting with loud/quiet/loud dynamics while Romagosa wails  of "compelled countenance"and a "life disavowed" in weary but powerful tones. If Desert Psychlist had to pick our favourite track on "Nausea" then it would have to be the next track "Charybdis", it  is the longest track on "Nausea" and it justifies its length by throwing all the bands influences and inspirations into a mix that sees slurred grungy guitar motifs vying with pounding industrial drumming and crunching doomic refrains making way for spaced out ambience and sampled narrative, it is all slightly schizophrenic, slightly unsettling but wholly brilliant! "Mereology" finds Leafdrinker going full grunge, its Nivana-esque squealing guitar motifs off set by a harsh, almost hardcore, vocal while "Endless, Nameless, Formless" could almost be considered straight heavy psych if it were not for its  dank doomic undercurrent, a special mention should go here to bassist Cole his eastern tinted bass line sitting beneath Romagosa's thrumming guitar chords, at just over the three quarter mark, is just delicious . "Phage" brings things to a conclusion, the song taking those loud/quiet/loud dynamics, toyed with on "Weirding Way", to whole other level while also throwing in some good old foot to floor galloping hard rock and a generous helping of swirling heavy psychedelic guitar shredding. 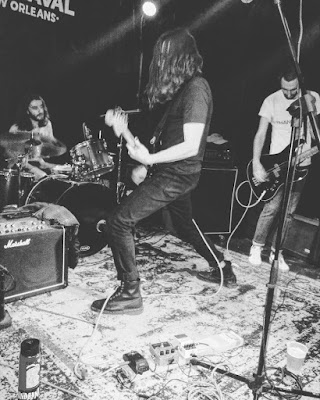 Although southern born and undoubtedly "underground" Leafdrinker differ from their more famous southern  brothers, like Down, Crowbar and Eyehategod, in that they are wholly open to absorbing elements from other more diverse genres into their sound. The band most definitely reside in that metallic ground zero that houses their contemporaries but with "Nausea" they have shown that they are not afraid to occasionally step out of their comfort zone and experiment with something a little different and unexpected.

Posted by Desert Psychlist at 12:30