Some of you who regularly peruse the pages of Desert Psychlist may well remember us reviewing a quite mesmerizing retro flavoured release, from a Californian combo called Skunk, entitled "Strange Vibration". Well sadly we have nothing to report on the Skunk front as of yet but we can tell you of a, made in lockdown, solo release from one it's members. 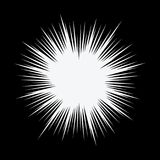 "Mind Palace of the Mushroom God" (Fuzzy Mind Records) is the conceptual brainchild of guitarist Dmitri Mavra who finding himself a little challenged by the tedium of a global lockdown decided to get busy and use his time to create something, under the banner of  Dungeon Weed,  a little different from the 70's inspired grooves he usually explores with Skunk. 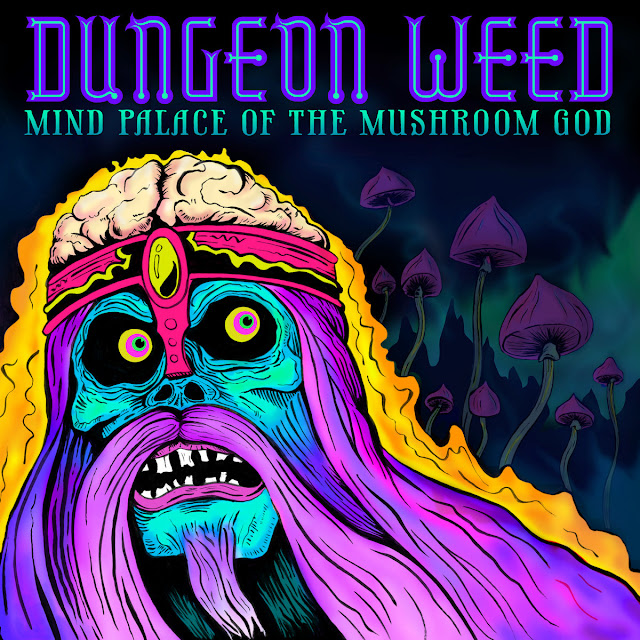 "Mind Palace of the Mushroom God" was created by Marva while in isolation, the multi-instrumentalist not only writing and arranging all the albums music but also supplying the bulk of its instrumentation and its vocals, however enforced quarantine did not stop him calling on a little help from a couple of friends to lend a hand and help flesh things out. Marva enlisted  Chris McGrew (mixer/producer at Hyde Street Studios) to handle all the albums percussion (Marva sent over backing tracks for the drummer to add his "thunder" to), and on Thia Moonbrook to lend her soaring tones to the vocals thereby creating a nice counterbalance with Marva's more gritty Captain Beefheart-like growls, other than that though "Mind Palace of the Mushroom God" is all Marva. The album's concept of a sorcerer caught in a web of his own making, in an attempt to cheat death, gives the green light for Marva's imagination to run riot and allows him the freedom to go into musical territories he might not have considered with either Skunk or his other band Slow Phase. There is gnarly rawness to the songs that populate "Mind Palace of the Mushroom God" that is probably closer in dynamic to sludge or stoner doom than it is to the 70's influenced grooves of Marva's other projects, having said that songs like "Beholder Gonna Fuck You Up", " Black Pudding" and "Mind Palace" share a fair share of old school screaming guitar solos and crunching hard rock refrains but are drowned in so much filthy fuzz and devastating distortion it is sometimes easy to miss them. This is not a criticism as it is the filthiness and the sheer gnarliness of both the albums production and its musical execution that is its biggest asset and makes this album such a delight to listen to. 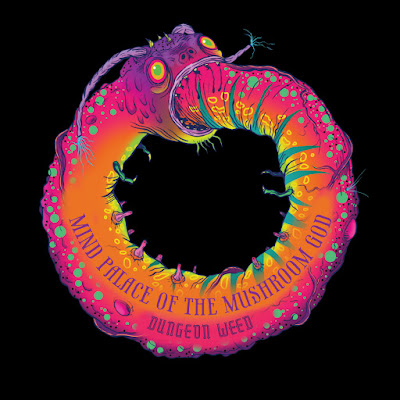 There will probably be a glut of solo projects like "Mind Palace of the Mushroom God" hitting the pages of Bandcamp and similar musical outlets, projects created by musicians forced into quarantine by this current global pandemic who with time on their hands have turned to working on their own ideas. Some will be great, some will be ok , some not so good, thankfully this one falls into the first category
Check it out ....
© 2020 Frazer Jones
Posted by Desert Psychlist at 02:30