If you mistakenly came to this page looking for an electrical device that might save you time with your culinary endeavors then we are afraid you are going to be disappointed, the "kitchen witch" we are discussing here is not something that will help you fluff up your soufflés or put a crispy edge on your bacon but is the name of an Australian band whose music has one foot in the clear waters of the blues and the other in the murky depths of stoner/hard rock and doom. Kitchen Witch hail from Adelaide, Australia and consist of Georgie Cosson (vocals); Conor Kinsella (guitars); Simon Elliott (bass) and John Russo (drums,/percussion), and have just released their second full length album "Earth and Ether" (Kozmik Artifactz Records) 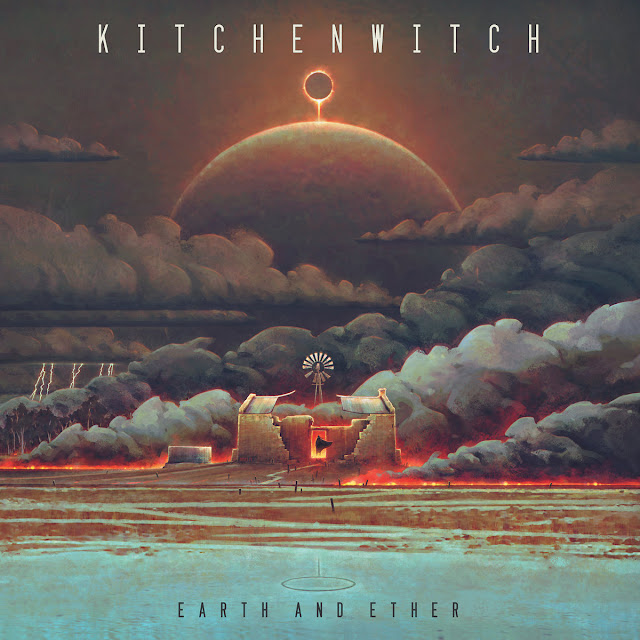 If you've had the pleasure of hearing Kitchen Witch's self titled debut album "Kitchen Witch" you will already be aware that these Adelaide groovesters have a penchant for blues based stonerized rock laced with an undercurrent of doomic bluster, you will also know that as well as containing three very skilled musicians, in Kinsella, Elliott and Russo, they also boast an exceptional vocalist in Cosson. What you might not know yet, unless you  have played the album prior to reading this review, is how much this band have matured both as musicians and songwriters since their last release. In Desert Psychlist's review of their debut we described the bands sound as "jamming a groove that mixes the psychedelic blues of The Big Brother and the Holding Company with the stoner/desert grooves of Kyuss", and in some respects that statement still holds water but after listening to "Earth and Ether", we have started to hear a little more darkness and depth creep into Kitchen Witch's sonic attack. The blues is still, and we expect will always be, at the root of much of what Kitchen Witch bring to the table but those darker aspects of their sound, which were only hinted at on their debut, are on "Earth and Ether" pushed a little further to the fore. The band can still lay down a ripping fuzzed out blues groove, as they do to great effect on songs like "Cave of Mischief ", the excellent title track "Earth and Ether" and the desert flavoured "Many Moons", but it is on songs, like "Lost", the exceptionally atmospheric "Sunrise" and the swirling "The Frontal Lobe" that it really becomes clear how far this band have progressed. Kitchen Witch on these songs explore a darker musical territory, territory usually the reserve of their more established and somewhat similar sounding contemporaries Holy Grove, the band dragging the blues kicking and screaming into domains the genre might not feel comfortable in but actually fits it quite well.

If you like your blues sprinkled with a little doomic spiciness and your doom salted with a touch of bluesy swagger then you can't go far wrong by giving "Earth and Ether" a spin.

Posted by Desert Psychlist at 03:43