Temple are a sort of loose "supergroup" project created by members of two of Sweden's finest exponents of riff based heavy rock, Surfing In Hell and Silver Devil. Now given their bands of origin it would be expected that Temple's line-up would be one that has a sound that leans towards the dark and doomic, and that expectation would be bang on the money, however Temple go that little bit further by managing to sound so much more doomic and darker on their debut release "Funeral Planet" (Ozium Records) than either of the bands that birthed them. 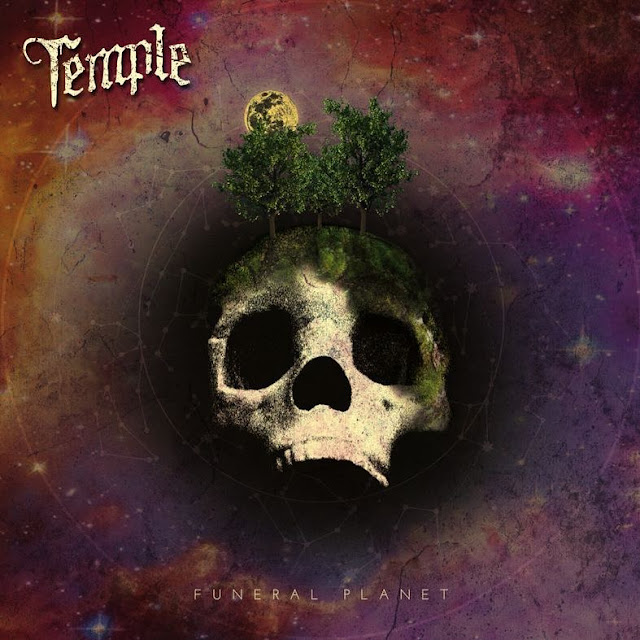 .
Atmosphere is a intrinsic ingredient in any music of a doomic nature and "Funeral Planet" is an album drenched in the stuff, it is an album that has a cloying, almost claustrophobic, quality that gives the listener the feeling they being enveloped in a shroud of impenetrable darkness and debilitating despair.. Despite this murky air of melancholy and misery, evoked by the bands low slung downturned refrains, pounding rhythms and clean powerful monotonic vocal melodies , there are moments when the darkness lifts and an occasional shard of light is allowed to penetrate the gloom. It has to be said that these moments are rare and present themselves not as sudden descents into navel gazing post-rock ambience or upward flights into lysergic laced experimentation but as more of a stepping off of the intensity pedal and allowing a little light relief to permeate the dank miasma of depression and despair the band create with their lumbering grooves. Although few and far between it is these brief moments of respite that give balance to songs like "Sea of Grief", "Magma" and "Ashes" and stops them become an overwhelming onslaught of anguish and despondency, allowing the listener a chance to catch a breath of much needed fresh air before being dragged back into Temple's deliciously dark and deliriously dank swirling whirlpool of abject misery and despair. 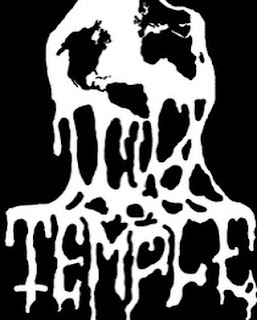 If your a fan of bands like Windhand, Haunted (Italy) and Electric Wizard then Temple's "Funeral Planet" is an album that will tick all of your relevant boxes, it is an album that trades on treacle thick doomic riffage and ponderous thundering rhythms but also one that has a few unexpected surprises concealed within its black clad sleeves.
Check it out .....
© 2020 Frazer Jones
Posted by Desert Psychlist at 03:26