Space, after the black arts, is probably one of the most common themes visited by those who ply their trade on the underside of  rock's mainstream, there is something about space's mystery, its solitude and its vastness that has inspired musicians, from Holst to Howling Giant, to explore its seemingly endless possibilities.

Spain's Mindust,  Mrzl  (bass); Vicenç (guitar); Kiru (vocals) and Jordi (drums), are no strangers to space themed rock, the bands 2013 release "Taking Off" (available as a free download on Bandcamp) explored  themes of a cosmic nature both in its music and its lyrics, however on "Taking Off" their approach came from a more traditional direction and saw the band trading off  raucous choppy hard rock guitar riffs with elements of  Colour Haze(ish) sonic experimentation. Seven years have now passed since the release of "Taking Off" and Mindust's approach has undergone some drastic changes, the band have retained their penchant for experimentation but have jettisoned those crunching riffs for a more lower, slower and heavier stoner doomic dynamic as can be witnessed on the bands latest EP "Lost Transmissions". "Lost Transmissions" is made up of only two songs, "Mayday" and "Adrift", the former just over three minutes in length, the latter extending to half way past the nine minute mark. Now that might seem a paltry offering, especially given there has been seven years between releases, but beggars can't be choosers and considering that we are living in uncertain time (Covid -19) the fact that bands are still able to release any form of music is something that should be applauded. Despite the brevity of content on "Lost Transmissions" there is no doubting its quality, Mindust's doomier, danker approach is one that suits their space orientated themes far better than the rockier riff'n'roll of their previous outing, the lower slower dynamic giving added depth to their more "out there" experimentations and the shift to a more monastic vocal delivery adding an air of mournful gravitas to the proceedings. First track "Mayday" builds its part up from humble beginnings with an atmospheric bass heavy Colour Haze-like groove, albeit slightly more doomic, around which swirling guitar solos swoop and soar and over which wafts a mournful vocal melody sang/chanted in almost Gregorian fashion, the songs groove slowly getting heavier and its vocals more forceful as it reaches its final destination. "Adrift" follows a similar pattern to its predecessor but here we find Mindust stretching out and sprinkling a little eastern promise over their spaced out doomic endeavors with Vicenç's exotic sounding guitar solos swooping and soaring over Mrzl's deep, bone shaking bass riffs and Jordi's tight, intricate yet fluid percussion to create enthralling dark hued spacescapes for Kiru to decorate with a superbly pitched low melancholic vocal. 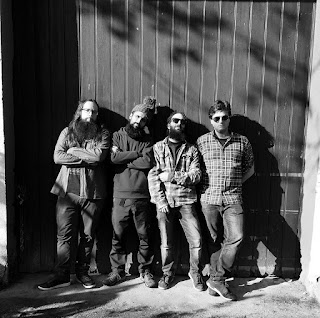 The blurb accompanying this EP, on the bands Bandcamp page, describes "Lost Transmissions" as "a reinterpretation of never before released Mindust songs, recorded live with proper safety measures, as demanded in the apocalyptic 2020" which suggests that the bands long hiatus from the recording studio has come to an end and there maybe, just maybe, a chance of something more coming from these guys in the future. On the evidence of these two mind-blowing tracks of swirling psychedelic tinted space doom let's hope so!