Those brave few who first began experimenting with hallucinogenic substances like LSD, psilocybin, mescaline and certain strains of wild mushrooms in the mid to late 60's may not have been aware at the time the effects their use would have on popular culture, especially when it came to music. With their minds expanded musicians started transposing their visual and auditory experiences into the sounds they were making, creating soundscapes with their music that had a certain freedom and an almost an almost transcendental quality. The reverberations from those early days of lysergic experimentation and musical exploration still abide to this day and nevermore so than in the music of today's underground rock scene where the word psychedelic may have been abbreviated to "psych" but is still as out there and experimental as the day it first came on to our radar.
One band embracing that spirit of musical adventure and bringing it up to date for a new generation are Chicago's Us As Caravan a three piece band who blend shoegaze(ish) texturing and  lysergic colourings with fuzz drenched riffage and thunderous rhythms, something that can be heard on their stunning new debut "Built". 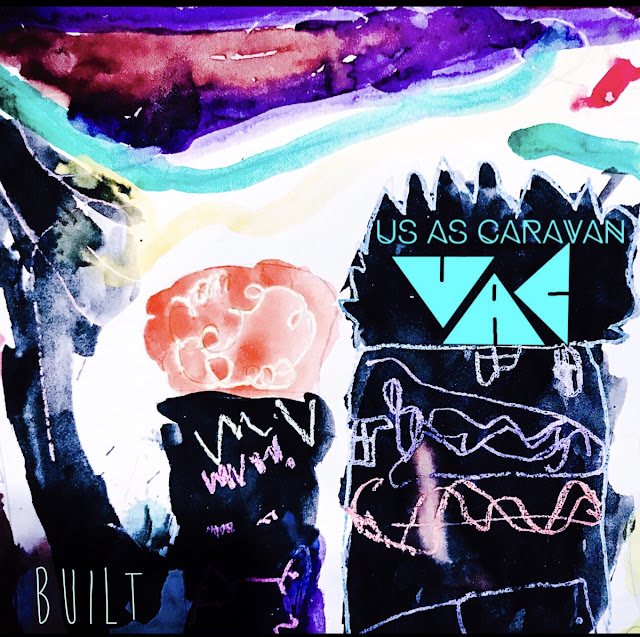 As any vinyl/CD buying, or even digital buying, music fan will tell you, sometimes an albums artwork can tell you more about the music inside than a thousand words will and the startling yet simple water colour and crayon painting that adorns "Built" tells you to expect something a little different, a little off-kilter and fresh.
Things start off well straight from the off, a warm liquid bass motif, accompanied by gradually increasing fuzz and feedback, introduces first track "Wave Goodbye", the song then exploding  into a heavily tripped out and hazy blues groove. This however is not the sort of blues groove your gonna hear coming out of some back street blues club played by old men in well worn suits telling you how their baby done them wrong, no this is a heady, trippy blues groove driven by gnarly bass and pounding drums, coated in strong clean, slightly indie vocals then decorated with layers of dirty fuzz and crackling distortion, it is still the blues but with a twist. "Damn Sure" follows and this time the band propel us down more spacey hard rock corridors with guitarist/vocalist Alex dialling his six string settings to phased and his vocals to melodic indie. The song has a strong heavy psych vibe made stronger by drummer Luis' incessant and exemplary use of the more shimmering and crashing components of his kit and Jimmy's ever present booming, growling bass. Next up is "So Called Man" a song that sees the band running the psychedelic flag to the top of the pole and truly embracing their more lysergic leanings. Swirling and hazy with colourful fractured guitar chords vying for space with soaring solos and glistening harmonics it almost feels as though the two previous songs have been gradually leading up to this point and the band now feel ready to cut free and fly. And fly they do with next offering "Chew The Fat" a song that floats and punches in equal measure, its undulating groove visiting elements of  hard rock, spacey psych and hazy blues as it winds along it's merry but terminally stoned way. "Sunfalcon" closes "Built" with a hard driven, heavily fuzzed, phased and distorted psychedelic rocker coated in powerful hazy vocals that has a vibe that suggests the band got together and decided they wanted to go out in a blaze of glory, all guns blazing and hell for leather, something they more than achieve here. 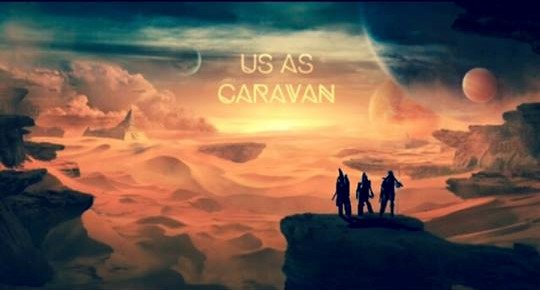 Us As Caravan are a stunning band unafraid to go out on a limb occasionally, a band who deliver a sound that is structured yet has fluidity and freedom, a band who should be mentioned in the same sentences as similar psych/blues trailblazers All Them Witches and Youngblood Supercult, a band you should check out.....