Venice, Italy that maze of canals linked by bridges was, during the middle-ages, once a major seat of power but is these days known more as tourist attraction for foreign travellers, however power can take many forms and there is a new power making its presence felt atop the wooden piles and limestone plates that hold the city above water and is one wielded by four musicians, Alberto Montagner (guitar), Max D'Ospina (bass/keyboards/vocals),Roberto "Mariuz" Mariuzzo (drums/vocals) and Massimo Battistella (guitar/keyboards), who go by the name Malota, that power is the power of the riff and it can be heard on the bands latest album "Kocmohabt". 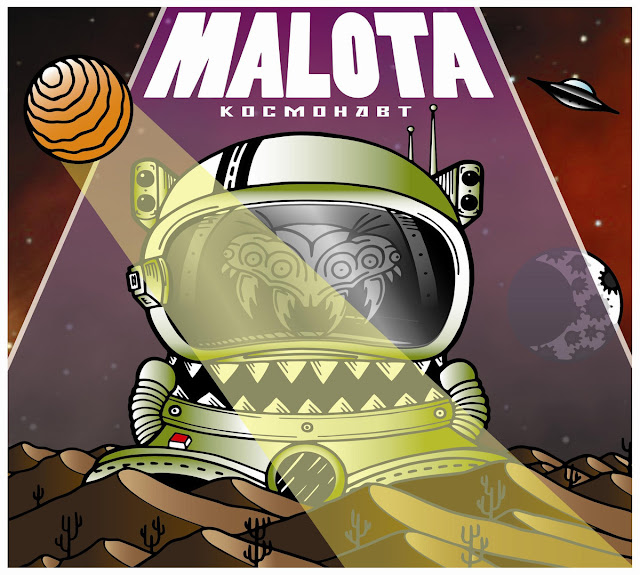 Concept albums seem to be coming out on an almost daily basis lately and "Kocmohabt" is yet another one, this time though there is a touch of tongue in cheek black humour involved as the theme concerns a journey through the cosmos not on a spaceship, designed to go where no man has been before, but on drugs. Songs with titles like "Visa for the Universe", "You Drive Me Junkie" and "Dimethyheptylpyran and Space Alien Dolphins" are served up with a mixture of swaggering hard rock bluster, gritty stoner/sludge attitude and a mischievous twinkle in the eye. From the absolutely delightful "The Long Sleep, The Wake and The Warp", with it's totally addictive and hard not to sing-a-long to chorus, through to the speaker shredding heaviness of "Buprenorphinelessness" there is a sense of roads much travelled, a feeling that this is less a concept and more a collective acid trip documented in music. Musically the band do not put a foot out of place with the band utilising a mixture of crunching riffage, thundering rhythms and strong throaty vocals with which to decorate their grooves overlaying those grooves with a wash of  clever keyboard effects and synthesised textures to give their sound, and songs, an extra lysergic dimension and astral spaciousness.. 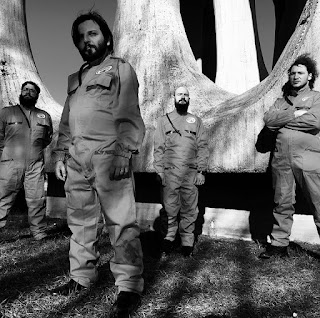 Listening to "Kocmohabt" brings to mind Neo's dilemma in the Matrix, "You take the blue pill, the story ends. You wake up in your bed and believe whatever you want to believe. You take the red pill, you stay in Wonderland, and I show you how deep the rabbit hole goes.". Desert Psychlist suggests you take the red pill and let Malota show you their universe.
Check 'em out ...