I guess you could call Baltimore's Stone Dust Riders a true garage band, the trio of Sean Kearney (guitar/vocals), Dennis Barth (bass) and the oddly named Cabbage (drums), having worked out their tunes, rehearsed and jammed them from a garage they call "The Compound" in Granite , Maryland. Now the words "garage band" these days seems to conjure up visions of  The Stooges, MC5 type grooves, raw and untamed rock with a ton of feral punkish attitude but Stone Dust Riders could not be further from that description, the sound coming from their garage is an intriguing mix of 70's hard rock bluster and 90's stoner/desert grooviness all seasoned with a large pinch of bluesy swagger, still slightly raw edged but with a certain finesse. Their debut release "Volume 1" may have been born in the garage but it wants to live in the mansion. 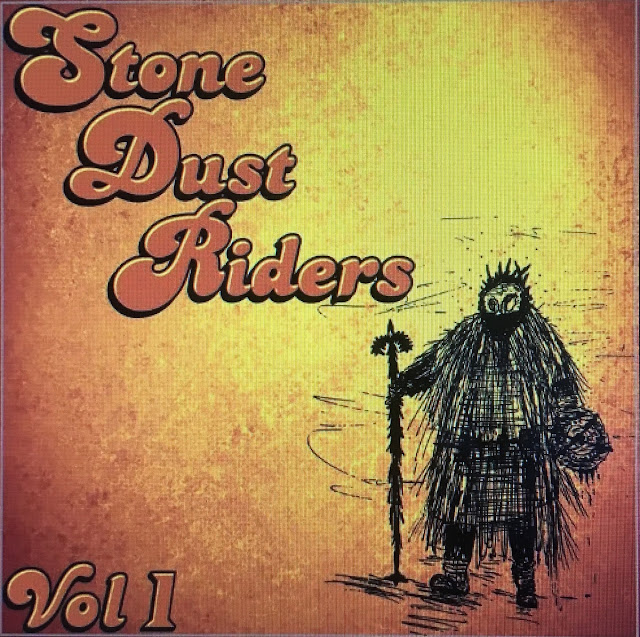 "Volume 1" kicks into life courtesy of the WAH drenched and fuzz heavy  instrumental "November" a delightfully grainy tome driven by Cabbage's solid, tight percussion and Barth's growling bass over which Kearney lays down a grizzly circular refrain embellished with gritty lead work. "Bike Ride" follows and we are suddenly plunged into newer territory with the band hitting into a funky blues groove that if it were not for its fuzz heavy mid-section you would swear was something lifted from a (pre-Michael McDonald) Doobie Brothers session thanks to its excellent vocal melody where Kearney perfectly channels the spirit, of that bands original vocalist (Tom Johnston), in both his tone and delivery.
Throughout "Volume 1" Stone Dust Riders explore different aspects and facets of that we call the "blues" putting a jazzy spin on them on "Steve The Dolphin", tinting them in psychedelic hues on "British Desert Tent" or just rocking them out with old school heaviness and southern swagger as on "Hominey & Grits" and "42",

Be you a hippy sporting a bandana and a kaftan, a stoner in cargo shorts and band tee or a hep cat in a zoot suit and tie you can rest assured that somewhere on "Volume 1" Stone Dust Riders have your blues preferences covered
Check it out ....