Portland Oregon's LàGoon wormed their way into Desert Psychlist's affections via their second full album release "L'affaire de Poisons", a stunning blend of garage rock attitude and punky aggression, an album that demanded attention from its very first note to its last. The band return this spring with a new collection of songs, collated under the banner of "Unwelcome", and it looks as if it's business as usual for this dynamic duo. "Sneering" would be the best way to describe Anthony Gaglia's vocal styling, the singer/guitarist has a distinctive tone that although not quite on the same level of sneeriness as that of (Sex Pistols/PIL frontman) John Lydon it does however possess a similar level of punkish arrogance and new wave snotyness. Having said this LaGoon's overall sonic impact probably has more in common with the primitive proto-punk/garage rock of Michigan's The Stooges than it does that of London's Sex Pistols, Gaglia's crunching, heavily distorted  guitar tones, pushed hard by Brady Maurer's tight punchy percussion, very much recalling the biting refrains of, the now sadly departed, Stooges six-stringer Ron Asheton. The band claim their influences to be "many different genres of heavy music, and the culture that surrounds skateboarding", Desert Psychlist has very little first hand knowledge of what makes up  "skateboarding culture" but on the evidence of songs like "The Thirst", "Alligator (In Your Head)" and "Live Through Death" maybe it's time we found out. 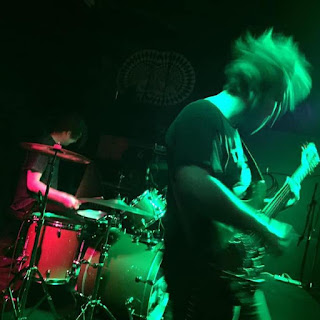 Raw and primal yet balanced with clever subtle hues and textures "The Unwelcome" is an uncompromising, radically different but wholly enjoyable blend of stoner fuzz and garage grit that is well worth taking the time to.....
Check out....