The Druids, a four piece hard/psych/space rock band from White Oak, Maryland are Eli "Stone Druid" Watson (guitar/vocals). Danny "Spacehawk" Alger (guitar/vocals), Jeremy "Weed Warlock" Dinges (bass) and Gary "Iceman" Isom (drums/percussion) and should not be mixed up with any of the countless similar named bands currently in operation, such as The Druids (UK, hard rock/glam) or Druid (Ohio, psych/blues).This version of The Druids, although sharing certain musical characteristics with those mentioned, is a different animal altogether, something their new release "Totem" more than testifies too. 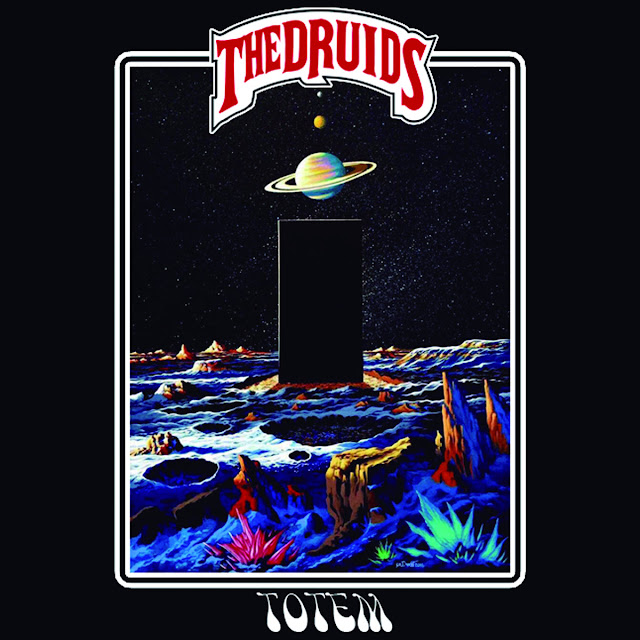 UK space rock pioneers Hawkwind played a huge part in shaping Desert Psychlist's appreciation of underground rock and it seems that the West London based cosmonauts have had the same effect on The Druids. It's not that Hawkwind's swirling space rock grooves are uppermost in The Druids overall sound it is just that, although not glaringly obvious, those grooves are nevertheless there sitting just below the surface and occasionally bubbling to top in the form of a vocal inflection or swirling spacey effect. The fact that the band include a song aptly entitled "Hawkwind" just compounds our theory.
First track "Cruising Astral Skies" does somewhat debunk the above statement by settling into a mid tempo hard rock groove that leans towards a more proto-metal sound but then "Atlantean" comes along and although somewhat doomier than anything Dave Brock & co may have come up with it does have a swirling space undercurrent and low-key vocal melody that just screams Hawklords. The aforementioned "Hawkwind" follows, an instrumental that leaves the listener in no doubt about its influences while "Moonshine Witch" brings a touch of bluesy bluster to the table and a hint of 60's psychedelia. "Sorcerers" places The Druids love of psych, space and 90's stoner rock together in one neat package and is followed by the excellent "Turtles Dream" a song that finds the band channelling a little Allman Brothers like swagger into their heady mix. Those Hawkwind vibes are never far away and resurface again on "High Society", the band lyrically referencing their lysergic cosmic leanings with lines like "lunar ships", "hidden realms" and "mushroom brews". "Totem" closes its account with "Sky Submarine" a song whose initial riff, if listened to closely, is a twisted, heavily psyched take on Black Sabbath's "Hand of Doom". 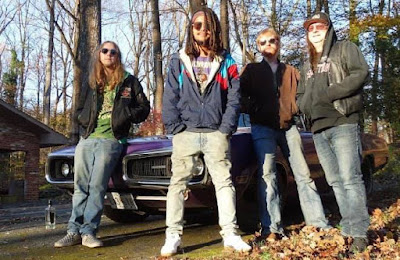 The Druids "Totem" is like a musical collage made up of the musical remnants that have influenced and shaped the bands sound, the band cleverly arranging those remnants so that they sound fresh, original and truly their own.
Check it out …..