Finding themselves at a loose end, after their main band The Order of Israfel decided to take an hiatus, Patrik Andersson Winberg (bass) and Hans Lilja (drums) teamed up with Winberg's old Doomdogs bandmate Tomas Eriksson (Intoxicate) on vocals to start a new project. The trio soon recruited guitarists Tommy Stegemann (Silverhorse), Jens Floren (Lommi) on and Patric Grammann (SFT/Neon Leon) to their cause and Dun Ringill was born.
The band have just released their debut album "Welcome" on Argonauta Records. 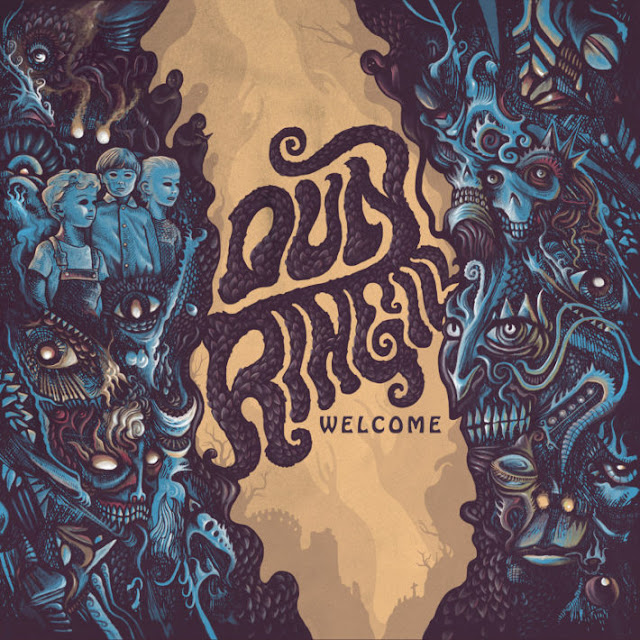 "Welcome" comes hot on the heels of new albums releases from Swedish doom veterans Candlemass and up and coming Swedes on the block Ordos and, either by design or happy coincidence, Dun Ringill's new album sits comfortably between the two and forms an unlikely bridge between the formers traditional doom and the latter's blackened stoner take on the genre. "Welcome" kicks off with "Welcome To The Fun Fair Horror Time Machine" and to say that this song does not share common ground with Ordos' song "House of the Dead" would be akin to saying David Bowie's "Gene Genie" bears no resemblance to The Sweet's "Blockbuster", Eriksson shifting through a similar spectrum of vocal styles to that of Ordos' Emil Johansson and, like the Upsala bands frontman, bringing an almost vaudeville/opera vibe to proceeding, Eriksson effectively playing all the parts. Musically, throughout "Welcome", Dun Ringill are bang on the money, the band laying beneath Eriksson's unique tones doomic grooves that sway between the traditional and modern, grooves driven by Winberg and Lilja's almost telepathic rhythmic understanding and further enhanced by Stegemann, Floren and Grammann's three pronged axe attack. A slew of guest musicians are drafted in to add texture and extra colour to proceedings with Swedish keyboard legend Per Wiberg (ex Opeth,/Spiritual Beggars/Kamchatka, ) adding his weight and Hammond to "The Demon Within".(which also features Matilda Winberg's vocals on the intro) while Emil Rolof (Bult/Lugnoro) supplies quirky piano to "Welcome To The Fun Fair Horror Time Machine" (also featuring Bjorn Johansson on flute) as well as mellotron to "Black Eyed Kids". "Welcome" is an apt title for Dun Ringill's debut album because once you enter you will not want to leave, content to revel in their unique and original blend of new and old doomic styles until one day they finally make an album entitled "Goodbye".
Check 'em out ….