Today Desert Psychlist takes a slight detour from those well trodden paths of stoner/desert, doom and psych we have slowly been building our reputation on and wander into territories that are not so familiar, territories that are sometimes known as post punk or melodic pop rock. Ove the years a lot of damage has been done in these two areas of music,bands like Blink 182, Green Day and The Offspring may have begun their careers with all the best intentions but with their success in building bridges between raucous punk and melodic pop they also unwittingly paved the way for whole slew of bandwagon jumpers hoping to get their zany videos on MTV. However there is still hope left for those that like their mayhem married to melody and that hope comes in the shape of a quintet from Bristol, UK going by the name of Superseed, a band who aim to restore the status quo with the release of their self titled debut "Superseed", 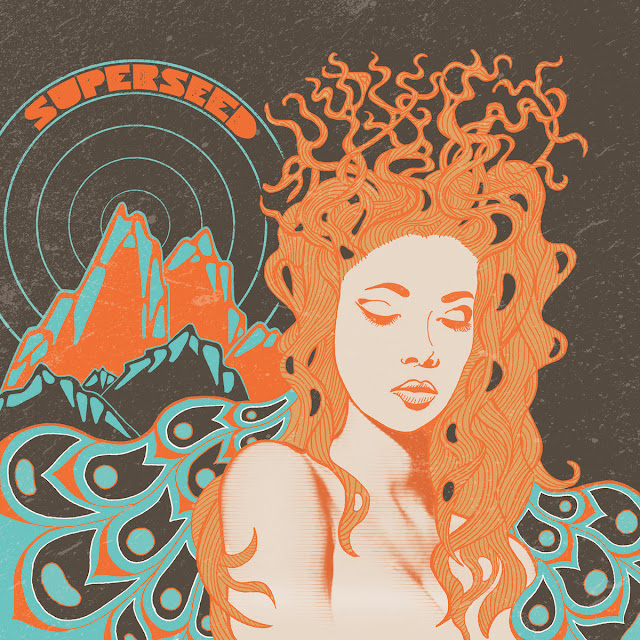 If you want sing along pop orientated punk Superseed can supply it but there is so much more to this band than just that, there is a stonerish desert undercurrent running through each and every song on this album, it is not a glaringly obvious one but one that is there nonetheless. The band are also not averse to harking back to earlier times either utilising aspects of 60's psych and garage rock to flesh out their fuzz fuelled forays and they coat those forays in a mixture of Beatle-esque harmonies and Monkee-ish pop melodies, the band coming over at times  like a modern day Spirit (Late 60's, early 70's cult psych pop/rock band led by the late Randy California).

Before you, the regular perusers of Desert Psychlist's pages, start angrily throwing your battle jackets and band badges in our direction for deigning to a review an album with pop punk connotations, take a moment to listen through the seventeen short sharp jabs of punchy fuzz driven pop and rock on offer and if you fail to find something to hang your hat on well then, and only then, let the throwing commence.
Check it out …..