The Hammond Organ has graced albums from a diverse array of musical genres, from gospel all the way through to death metal but it is its use in 70's classic rock that it will probably be remembered for the most. Back in the golden age of rock the not so humble Hammond was utilised by some of that decades biggest hitters to fill out their grooves and in some of those bands was actually on an even par with, that most rock of instruments, the electric guitar. Most notable of the Hammond/guitar combinations was that of Deep Purple's Jon Lord and Ritchie Blackmore but there has also been many others who have reaped rewards form this combination of frets and keys like Uriah Heep's Ken Hensley and Mick Box, and of course, Blind Faith's short lived pairing of Steve Windwood and Eric Clapton.
Germany's Hound, Wanja Neite (vocals), Nando Grujic (guitar), Jonas Gehlen (organ), Yannick Aderb (bass) and John Senft (drums), are a band who well understand the importance of keys in capturing that authentic 70's sound as can be witnessed on their Hammond soaked new album "Settle Your Scores". 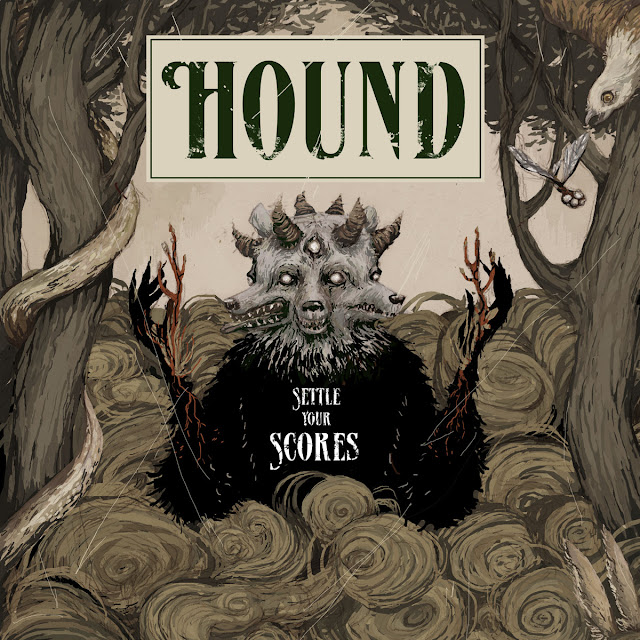 Hound (not be confused with the Philadelphian hard rockers of the same name) make no bones about the fact that their sound is rooted in the classic rock of the early to mid seventies, to tell these guys that they have a similar sound to any of the bands mentioned above would no doubt elicit broad grins and much mutual backslapping and it is this honesty, in what they do, that actually works for them. Hound are not a retro band in the sense that they are trying to recreate a sound that came from a bygone age (although that is what is happening), what Hound are doing here is more about celebrating that sound and reinvigorating it for a new audience while at the same time putting their own spin on things. There is a real  feeling of satisfaction and joy running through each and every song on "Settle Your Scores" it almost feels at times as if these guys cannot believe that they are actually pulling this whole classic rock thing off and doing it with such ease and aplomb. Grujic's scorching lead work and crunching chords are more than matched by Gehelen's swirling,parping Hammond and with Aderb's. liquid/growling bass and Senft's powerful percussion driving them on the pair make the most of the freedoms their rhythm section affords them by trading off and duelling around Niete's vocals, sometimes in tandem, sometimes in opposition. Niete's authentic classic rock tones are the crowning glory of Hound's overall groove his voice ,a mixture of fragility and power ,soars over the swirling backdrops behind them, an easy on the ear mixture of Jon Anderson (Yes) like soprano sweetness and Burke Shelley (Budgie) like countertenor gruffness, combining with the pulsating classic rock beneath them to create a sound and groove that although is unashamedly rooted in the past has a vitality very much of today. 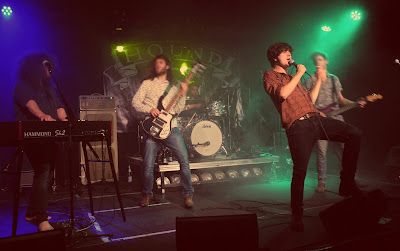 If the sound of a Hammond Organ swirling through a rotating Leslie speaker, trading off licks and solos with a screaming guitar, is your worst nightmare then "Settle Your Scores" is not the album for you, if however the keys and strings forays of Deep Purple, Uriah Heep and Atomic Rooster are what makes you get out of bed in the morning then hold on to your hat, your going to love this.
Check it out ….

Posted by Desert Psychlist at 13:28