Greek mythology tells us that from the demise of the legendary Phoenix another will rise from its ashes and take its place, well that legend when applied to Oxford based doomsters Indica Blues has a ring of truth to it. When cult Oxford doomsters Caravan of Whores called it a day fan Tom Pilsworth, a guitarist/vocalist with a love of Kyuss and Electric Wizard, approached CoW's now out of work guitarist John Slaymaker and invited him to a jam, the pair hit it off both musically and personally and after recruiting Andrew Haines-Villalta on bass and Ed Glenn on drums (Glenn has since left the band and has been replaced by Rich Walker) Indica Blues were born.
The current line up have just released the follow up to their well received debut "Ruins On The Shore" entitled "Hymns For A Dying Realm". ( Releases April 21 2018. available to pre-order from their Bandcamp page now) 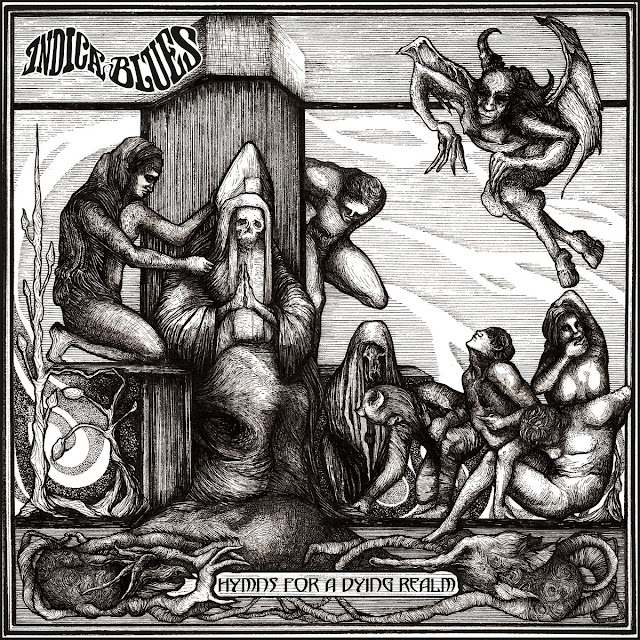 Doom, as a genre, is a many headed beast sprouting a myriad of sub-genre faces snapping and snarling at each other from a dark powerful neck so the question you may be asking now is what doomic face does Oxford's Indica Blues wear? Well the answer to that question is not as straightforward as you might expect as Indica Blues are as prone to travelling the traditional route as they are to travelling down more diverse roads, the band blending elements of  old school grandeur with those of a more lysergic and stonerized nature while at the same time tipping their caps to the Sabbath's, Budgie's and May Blitz's whose proto-metal endeavour's unwittingly and unknowingly kick started this whole doom thing. The old school elements of  Indica Blues sound are well represented here on "Hymns For A Dying Realm" by the albums first two songs "Cosmic Fall" and "Knight's Return" both of which are driven by pounding percussion and throbbing deep bass lines then overlaid with clean. slightly stilted and gothic vocal tones around which overdriven crunching riffs and swirling dark solo's are weaved. If the grandiose doom of the likes of Candlemass and Reverend Bizarre are your thing then you may now be thinking you've opened the door to your own personal heaven but there is more to Indica Blues than just big riffs and big vocals as can be witnessed on the album's next track,"Reigns End", which not only raises the albums tempo up a notch or two but also sees the band experimenting with touches of goth rock texturing. Here the big riffs and pummeling percussion, employed on the songs verses, are fractured by shimmering chordal voicings, on its chorus, and give the song a feel that would not have sounded out of place on one of The Cure's (British goth rock band) darker, early career, albums. "Scum River" follows and finds the band back in low, slow territory but this time salting their sedate refrains with a sprinkling of heady lysergic flavouring with scorching blues infused lead work swooping and swirling over a backdrop of grainy doom groove. "Pearls In The Ash" and "Island of Hate" follow in very much the same vein with heavy riffs, thundering percussion and psych drenched solo's the frame around which mournful clean vocals tell their stories of  woe and wonder before the band bring things to a close with "Psychedelic Haze" a huge atmospheric tome infused with bluesy colourings and proto doomic dankness that takes off into the stratosphere in its final third courtesy of it's spine-chilling, jaw dropping guitar solo. Indica Blues, with "Hymns For A Dying Realm", have taken traditional doom back into territories the genre was heading towards, before the stoners, droners and black metallers hijacked it and diverted it down new paths, and have done so by not blinkering themselves to those other forms and styles but by amalgamating some, but not all, of those forms into their own sound, creating a sort of hybrid that has is roots in the traditional but it's head in the clouds.
Check it out ....