Who remembers nights hiding behind a cushion watching old Italian horror movies? Ok if you watch them now they are not so scary and even pretty laughable but back in their day they were guaranteed to give you sleepless nights and have you jumping at every creak and groan of your old wooden floorboards. Haunt, a trio from Central Illinois, with influences that range from The Beatles to Voivoid, rehash those days of wide eyed panic and bedclothes pulled up high to the neck with their self recorded, self produced debut release "Haunt" a stunning mix of  60's style vocal harmonies and retro flavoured horror inspired hard/classic rock and metal, 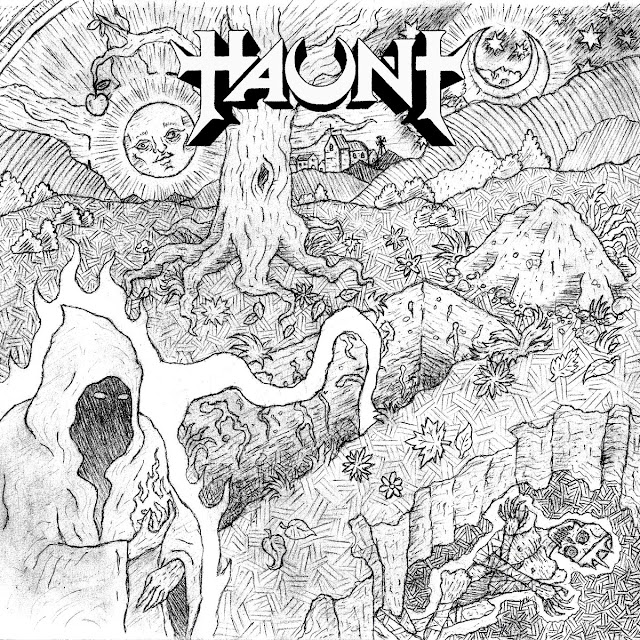 Haunt are a band who like to play their cards close to their chests only telling us, in their own words, that they are "a lead vocalist on  guitar who also provides keyboards, a bassist who also provides backing vocals and a drummer who provides lead vocal harmonies" adding that they "hope to be thought of as a single entity (a unholy trinity)", all pretty mysterious stuff  but then that air of mystery and intrigue is also reflected in their music.
"Hymn" opens "Haunt" with beautifully executed choral harmonies and counter harmonies wordlessly sang a-cappella style that although not fully representative of the grooves to follow strangely sets the tone for the rest of the album. What does follow is "Revenant" a absolutely enthralling song that boasts among other things swathes of swirling keyboard colouring, a tolling bell and  a cool mix of vocal harmonies and vocal trade offs all superbly supported by tight, solid rhythms and topped off by a recurring guitar motif that will have listeners drooling and salivating. Next track "Planet Horror" sees Haunt move briefly into sci-fi territory with a tune that has an almost comic book quality, theremin-like whoops and whirls swish and swoop around a pacey groove underpinned by flourishes of textured keyboard that for some reason had Desert Psychlist recalling the rock opera " The Rocky Horror Show" especially in it's addictive chorus and playful mix of vocal dynamics. The 60's soaked "Build Your Wall" is up next and finds the band hitting a groove and vocal execution that would, if he was still alive, have had 60's psych rock pioneers Spirit's sadly passed guitarist Randy California beaming with pride. "Living Room" and "Thy Will Be Done" get Haunt back on the horror/occult track, the former a tongue in cheek  Lovecraftian  tale set in a domestic situation, the latter a song with a mini rock opera vibe enhanced by a mixture of early CSN&Y/Byrds like vocal harmonies. "Rise From Your Grave" closes "Haunt" with a beautifully arranged song filled to overflowing with clever little vocal hooks and instrumental catches that will pull you in deeper and deeper into Haunt's world of comic book horror and macabre sci-fi inspired intrigue and have you never wanting, or be able to, leave. 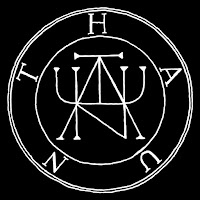 Fate brought Desert Psychlist to "Haunt", (we were searching for a band with a similar name) and if you are not a regular reader of these hallowed pages and fate has also brought you here under those very same circumstances then don't go away without listening, go with fates flow and check it out ....