Michigan's Electric Huldra describe what they do as simply rock'n'roll and although the Ann Arbor trio of Bobby Marks (guitar/vox), Troy Hufford (guitar/vox) and Dominic Elder (drums) cite among their influences such stonerized doom luminaries as Sleep and Uncle Acid & The Deadbeats it is at the more raucous end of the stoner/desert/ hard rock spectrum that Electric Huldra's sound resides, as can be witnessed on the band's debut release "Roadburner" 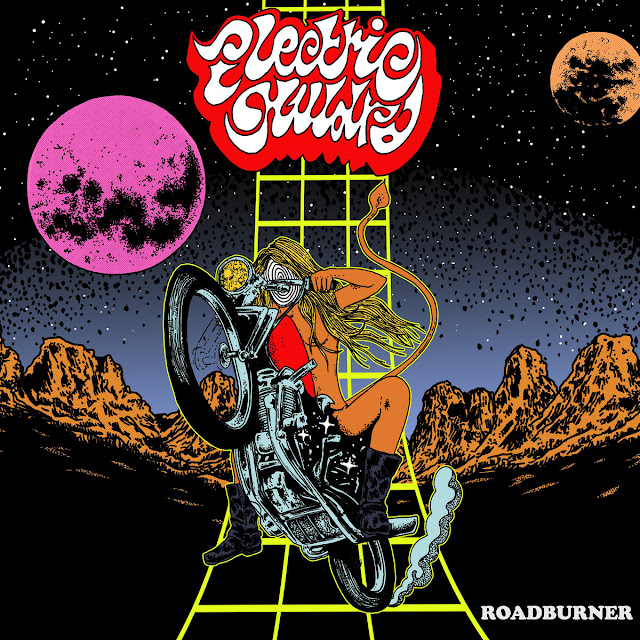 First track "Stand Here" nails Electric Huldra's rawk'n'roll credentials to the mast with what we would describe here, in Desert Psychlist's UK home, as "a little belter". If the songs raucous swathes of grainy riffage, underpinned by a tsunami of crashing percussion, fragmented with deliciously addictive guitar motifs is not enough to get the juices flowing then when the strong clean and distinctive vocal melodies kick in they soon will be. Some of you eagle eyed readers out there may have noticed that there has been no mention of a bass player as of yet and you would be right and the reason is there isn't one! Hufford and Marks, through a combination of tunings and dynamics, handle the bottom end between them and unless you were born with a perfect ear you would hardly notice.
"Never Forgave", a song with a heavy doomic feel, gets around being bass-less by underpinning its groove with a low thrumming, heavily reverberated guitar refrain enhanced upon and embellished with the other guitarists slightly less abrasive, but just as effective, tone and by the sheer force of Elder's heavy pounding drums and the songs superbly executed swinging vocal melody. "Doubt In Me" and "You Own Me" both find Electric Huldra roadtripping through more desert flavoured climates, the former infectious and gritty, the latter throbbing and a little bluesy. Final track "Roadburner" sees the band adding a touch of dankness and darkness into their sound, a low circular refrain the foundation around which elements of lysergic colourings and textures are applied, the guitarists injecting touches of eastern flavouring into a groove that builds layer by glorious layer and is coated in strong powerful vocals. 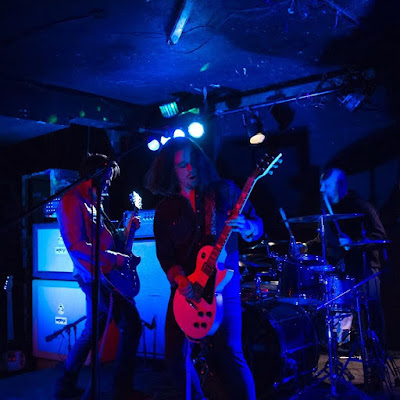 Two six stringers, one drummer and no bassist might have you thinking these guys might come across a little light on "oomph" but you'd be wrong "Roadburner" is an album overflowing with "oomph" and one you should definitely check out ....