Wizard Union, Samir (guitar/vocals), Aaron (bass/backing vocals) and Larry (drums), started off as a three piece band in 2012 then with the idea of working with similar minded local musicians added  "collective" to their name. This proved a little confusing to those outside of the bands immediate circle and so "collective" was dropped from their name and the band returned to being a trio, self releasing/promoting their own albums as well as those of their numerous side projects. The band are currently promoting their latest EP "Ceremonial Smoke" a four song opus  of doom laden sludge and punk. 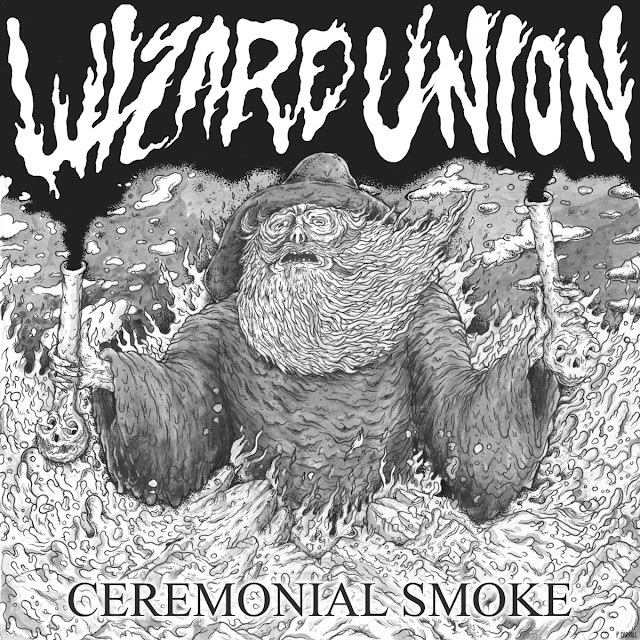 If the heavily distorted guitar refrain that introduces "Swords Out For Crom" does not raise those little hairs on the back of your neck then Desert Psychlist suggests you quickly contact your doctor as you may be suffering from some form of sensory deprivation. Sounding like an angle grinder cutting through concrete and supported by big booming bass and solid, punchy percussion this is a riff that grabs you by the throat from note one and refuses to let go. If this is not enough to have you drooling and salivating like a zombie with a severed limb dangling before him then when the vocals kick in you soon will be. Low pitched, with an almost breathy delivery the asthmatic demon-like tones are perfectly in sync with the grinding raucousness of the groove and take the song to an altogether other level. "Spitting Venom" follows and once again the listener is plunged into Wizard Union's world of demonic rasp'n'roll with the band laying down a groove that although touching on the Sabbath-esque, with its shifts in signature and tempo, has a harder much more abrasive, blackened edge. Just as your starting to get really comfortable and digging deep into Wizard Union's take on doomic heavy sludge the band throw in a meteor sized curveball in the shape of "Give Me That Amulet You Witch" a startling but brief experiment in dissonance and angular groove that sees the vocals take on a punkier but nonetheless demonic edge. If you can imagine, late period Captain Beefheart, writing a song for a heavy sludge band then  this is what you might come up with. "Wizard Union - Ceremonial Smoke" finds Wizard Union returning to more traditional climes with a song that boasts a deliciously addictive chugging guitar riff pushed hard by grizzled bass and pounding drums and ends with what sounds, to Desert Psychlist, like a kazoo solo! 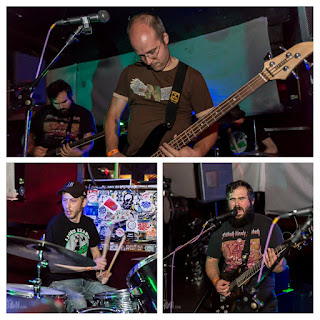