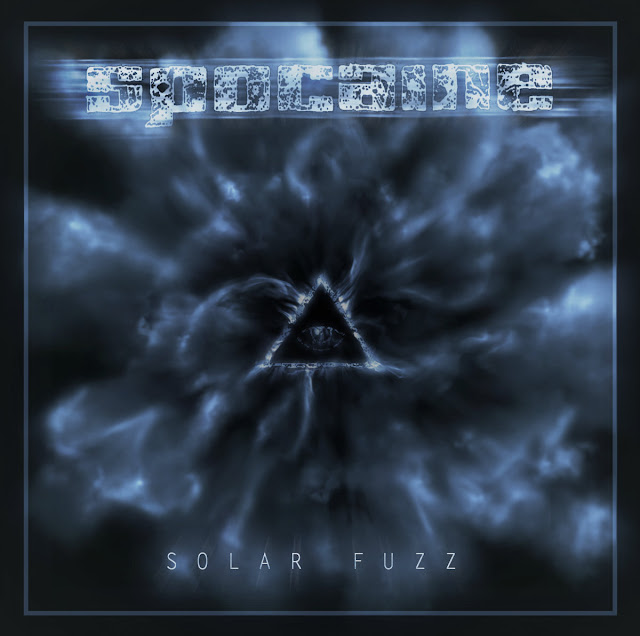 "Intro" starts things rolling it's short sharp burst of solid drum beats and raked guitar strings and swirling effects seguing into a thrumming heavy rock riff underpinned with deep rumbling bass.
"Giants Walk" follows and finds Spocaine jamming a groove that recalls Maryland fuzzmeisters Clutch's bluesier moments but also those of Greece's Planet Of Zeus minus the hardcore vocals, jagged grooves of bluesy bluster taken to another level by Florian Rauch's big vocal tones, the frontman's bear-like growl tinged with stoner grit and southern swagger a dominant force as he roars over a gritty backdrop of gnarly fuzzed out groove.
"Solar Fuzz" explodes from the speakers on a wave of chainsaw guitar riffage, guitarists Stefan and Weber laying down a crunching heavily fuzzed refrain superbly backed up by Gundler's thrumming bass and Tim Rauch's persistent and pulverising percussion. Into this maelstrom of gloriously distorted sludge-like noise enters Florian Rauch, sounding like he's been gargling razors and smoking tree bark, telling tales of a sun "that blinds my eyes" as well as throwing an Ozzy -like "yeah" in here and there.
"Into The Light" sees Spocaine hitting a groove that sits comfortably between doom and southern metal with Florian Rauch's grizzled tones crooning over  a bedrock of big resounding guitar chords, booming bass lines and military style drumming before exploding into a gloriously powerful proto-metal jam and taking things to a deliciously noisy close.
"Outro" wraps things up with a brief but quite delightful foray into experimental territory with hand played percussion the base around which big booming bass resounds and reverberates and heavily effected guitars add colouring and texture.

Three "proper" songs and two instrumentals is a little less than Desert Psychlist was hoping from Spocaine's latest release but beggars can't be choosers and what you do get is as good as some bands release on a whole album.
Check it out ....