"Groovy Sexy Viking Funk Metal from Outerspace" is not a musical tag you're likely to come across too frequently but it is the description Pennsylvanian groovsters Almost Honest use to describe their brand of foot to the floor, no-nonsense riff'n'roll. The band, Shayne Reed (vocals, guitar),Seth Jackson (bass), Quinten Spangler (drums) and Zach Keiffer (lead guitar), whose influences include Red Fang, Mastodon and the Red Hot Chilli Peppers, have been together since 2013 and have been pedalling their mix of funk, fuzz and sludge grooves around their home base and further afield ever since.. This year sees the release of their first full album "Thunder Mouth", ten tracks of quirky funk fuelled rock'n'roll available through their Bandcamp page (here) 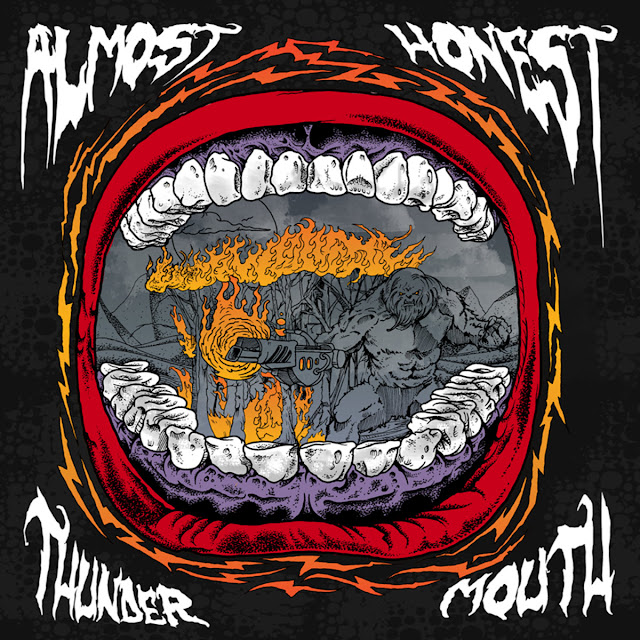 "Thunder Mouth" is an album that, although possessing all the attributes usually expected to be found within the stoner/sludge and hard rock canon, sits slightly left of field of those expectations. Raucous riffage, shifting time signatures and thunderous pounding rhythms can all be happily ticked off as you move through albums list of tracks but there's an underlying, slightly off-kilter quirkiness permeating each and every song. The first indication of this left of field vibe can be found in Shayne Reed's vocals, the guitarist/vocalists slightly gothic/indie tones are clean, strong with a subtle raw edge and are pitched a little lower than what is usually the norm within the stoner genre giving them a startling unique feel. This feeling of uniqueness is mirrored by Jackson and Spangler's superb, ever shifting rhythmic bluster, the bassist and drummer combining with Reed's guitar to lay down a plethora of jagged groove, switching from funky metallic to hard and rocking within a heartbeat. Over, through and around these refrains and rhythms Keiffer's lead work shifts between bluesy swagger and neo-classical shred, ripping both complex and loose solos from his guitar that soar majestically above the grooves below like eagles riding warm thermal updrafts.
Quirky, funky, gritty and raucous all wrapped up in one bundle might may sound like a recipe for disaster but Almost Honest manage to pull all these threads together to create an album that is slightly different but highly enjoyable
Check it out .....