Rosy Finch ~ Welcome You to Witchboro 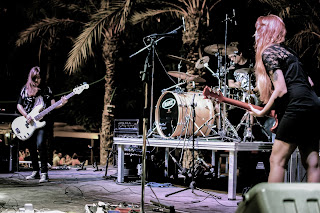 I have to admit that any band containing two women are bound to get my attention, not for any drooly, knuckle dragging sexist reasons but for the fact I have been championing women's place in rock music for a long time. I've lost count of how many times I've heard  guys say "I never listen to  female singers" or "she plays ok...for a girl" so when a band come along who blow those misconception out of the window well...you bet i'm gonna listen

Rosy Finch are two women Elena García (Vocals/Bass guitar), Mireia Porto (Lead Vocals/Guitars) and one guy Lluís Mas (Drums) that play gritty hard/stoner rock flecked with elements of psych, grunge and sludge that in places borders on extreme but always manages to pull back from the edge  before falling into chaos. 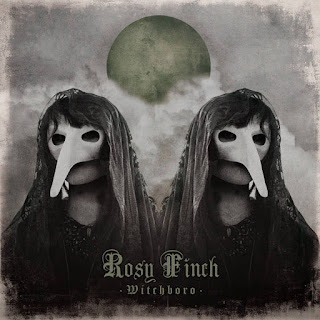 This month the band released their debut "Witchboro" a concept album, of sorts, that depicts the sounds of a mythical village of the same name, whether this works as concepts go i'm not sure but this does not become an issue as the songs are strong enough to hold their own as individual pieces.
"Ursula" kicks off the album with fine style all circular riffs and angular rhythms with the vocals of  Mireia Porto swinging from sweet and haunting to feral and anguished but never tipping over to guttural and harsh. Elena Garcia and  Lluís Mas never give an inch locking the bass and drums together as a solid unit and allowing Porto's voice and guitar to paint sonic soundscapes over the top. The rest of the album follows in a similar vein of stoner infused riffage and psych wigouts until you get to "Polvo Zombi" a beautiful mix of doomy atmospherics and sweet vocals that is dominated by a pounding drum and bass pattern from Garcia and Mas. The track heralds the second half of the village of Witcboro concept and sees the sound move away from the stoner sound of the first four tracks and shift towards a more ethereal and occult feel using elements of atmospherics and psychedelic interludes to colour and give texture to the music. The final track "Daphne vs Apollo" sees the two sides of the concept fused together in one song, the fuzz and the atmospherics hand in hand and walking into the sun and is a fitting conclusion to a damn fine album.
Posted by Desert Psychlist at 14:02