There is something going on in Greece, I don't know if there is something in the water over there but the country that gave us the foundations of  modern civilised society sure seem to produce the goods when it comes to good "underground " rock. 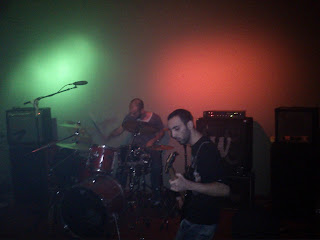 Arrakis are from Thessaloniki, Greece and were formed in 2012 with the sole intention of playing a form of rock music that would not be restricted to the blues based blueprints of American and English rock bands but would have a more European vibe with plenty of room for improvisation and freedom of expression. Comprising of three members Panagiotis Haris on guitar, Iraklis Dimitriadis on bass and Evaggelos Anastasiou  on drums Arrakis have released a number of rough demos via Bandcamp and have recently released an EP "Sanatoriun" and a full album "Ammu Dia" both of which can also be found at Bandcamp. 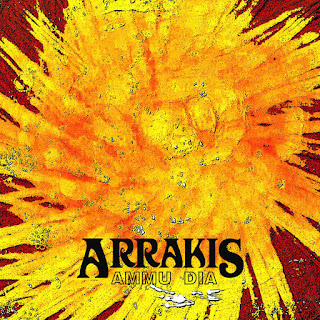 "Ammu Dia" is a stunning mix of  instrumental stoner/desert grooviness and  heavy psych/krautrock complexity that is a myriad of colour, texture and beauty .Heavy in places but never brutal " Ammu Dia" never sits still, never gets stuck in a rut and there is a feeling that this music could at any minute descend into chaos if it were not for the three musicians pulling on the reins and steering it back to safer ground. A perfect example to this is the closing 12+ minute "Diplomacy?" a slow burning psych wigout that has  Panagiotis Haris' guitar teasing out wailing wah pedal solos, screeching feedback and glorious lysergic licks while  Dimitriadis  and Anastasiou keep it all grounded with their excellent rhythm work, never letting the music get away from them and pulling it all back to earth when it starts to get a little too cosmic, superb!

If you like your music experimental, exciting and with a certain amount of freedom and if Colour Haze, Sungrazer etc.rock your musical boat then check these guys out you will not be disappointed.