There’s a lot of stoner/desert bands out there who are experimenting with amalgamating a plethora of styles into their sonic cannons, adding some psych here a little doom there a touch of jazz, a little reggae and generally mixing it up. This is all great and can only be good for the scene as a whole but now and then I still get a yearning to hear some of that old school balls to the wall, fat juicy fuzzed up stoner/desert the way it sounded back in the day. Fusskalt deliver this in spades.


Fusskalt are from Aarhus, Denmark and consist of five dudes who take their lead from bands like Kyuss, Red Fang and Monster Magnet in other words they play stoner/hard rock with big chords, big riffs and truckloads of passion and attitude. Guitars are handled by Nick Jenson and Thomas Brandt, Jenson laying down the grit and fuzz on rhythm and Brandt serving up delicious solos and licks over the top. Beneath and below are the powerful engine room of Janus Kinke Pederson(bass) and Jonas Emil Nielson  (drums) keeping it tight and solid as they drive the music forward. Vocals are handled by  Lars Frederiksen whose gritty, slightly throaty roar fits the bands sound like a hand in a velvet glove, forceful and strong yet gruffly mellow when a songs dynamic calls for it.


Fusskalt recently released their third recording “Overdrive” a thunderous collection of stoner anthems that showcases not only their musical chops but also shows they can write a good tune …or five. Tunes that are full of infectious hooks and melodies and that go to prove this is not just a band who are going to rely on a few riffs to see them through but a band who know how to construct a song from top to bottom and making it work on every level. 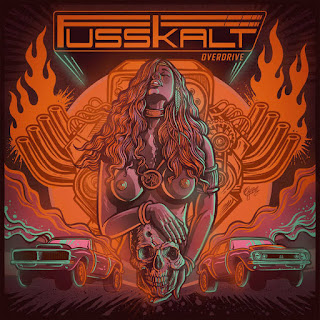 Check these guys out, Fusskalt are not doing anything genre changing or radical musically but what they are doing is making passionate, extremely well played rock music that has a lot more to it that than you might first realise
Posted by Desert Psychlist at 10:37