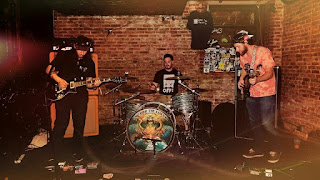 Mountainwolf are a trio out of  Annapolis, MD,  Chris Gipple (bass), Thomas Coster (drums) and Tyler Vaillant (guitar, vocals) and have just released their new album " Silk Road"
"Silk Road" blends together 70's heavy rock with 80's alt/grunge, throws in a little doom, a smattering of psych and whole lot of Mountainwolf  to make this one of the best "rock" albums you will hear this year. 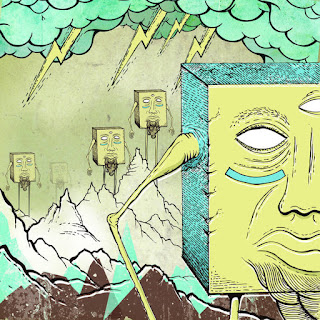 The album kicks off with "The Jam" five minutes and four seconds of  stoner excellence incorporating loud quiet loud grunge dynamics, gritty  stoner riffage and moments of psychedelic subtlety..
Next track "Wine x Weed" utilises a dirty fuzzed up doomy riff  around a low key, mournful vocal that then descends into spacey atmospherics with Vailllant using a ton of effects to create a lysergic, cosmic mood while Gipple and Coster hold it all together underneath until it all kicks off again at the end.
"LSD" for me is the stand out track on the album with it's phased guitar riff repeating over and around a delicious vocal. Vaillant pulls out his best solo on the album here, slightly Iommi-esque and with plenty of bluesy feel.
"Mountainwolf" sees the band nod their heads towards "Pearl Jam" with a track that would not have sounded out of place on that bands album "Ten" as would the next two "Freedom" and "Heroin 1991"
"Via Amorosa" is a nice little groover that goes from grungey doom into cosmic madness in the final third.
"Lo-Fi" confuses me and I have no-idea why it's included on here but as its only a minute and half long it doesn't hurt too much
"Hyphy Blues" is an all out rocker with a totally infectious guitar lick that sits over the main riff.
Closer "Via Dante" almost topples "LSD" for best track status, full of moody atmospheric psych and acid blues guitar pyrotechnics.