Attempting to reach unattainable goals knowing that we are bound to fail is something we as humans have hardwired into our DNA, but still we try. A strange statement to begin a review with you might think but climbing ladders only to reach the bottom rung again is the theme chosen by Quebec quartet Godhead Lizard to tie together the bands latest collection of songs for their second full length album "V838", and believe us when we say it's a climb worth undertaking. 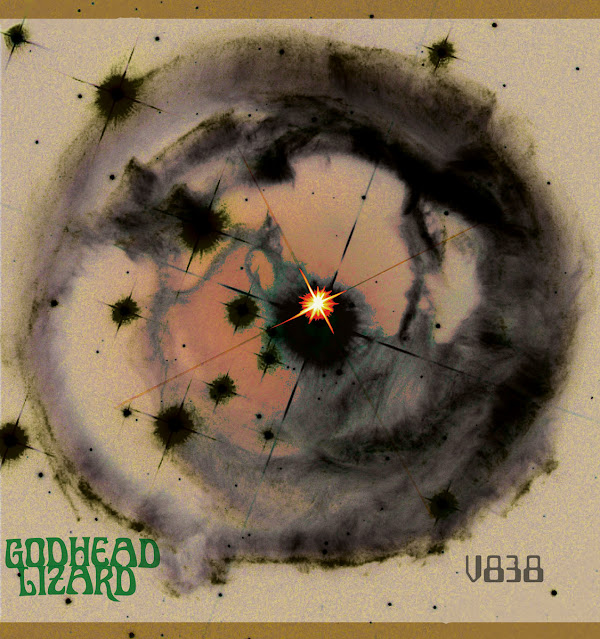 "Climbing all this way up just to get this? If the sky is a king, chaos is my queen" sings vocalist Vince on opening track "Vertigo", his powerful vocal carrying a throaty soulful weariness totally suited to both the songs lyrical content and the music surrounding that content, those surrounding grooves being a mixture of Sabbathian  proto-doom and bluesy hard rock awash with grainy fuzz and thrumming distortion that is driven hard by a battery of thundering percussion. As an opening track "Vertigo" is pretty impressive stuff but we've only just scratched the surface and what's to come is as equally impressive if not more so.  Next track "Cracks & Mirror" kicks off with one of those recurring guitar motifs so beloved of  bands like Sasquatch and Black Sabbath but then plummets into a juddering jarring stoner doom(ish) groove anchored by bassist Phil's growling bass and drummer Jo's pounding skins and cymbals over which guitarist Nic chops out fuzz soaked power chords and distortion saturated bluesy solos, Vince placing the cherry firmly on the musical cake with a powerful and emotive vocal. "Chiskar" follows and initially jams a hazy lysergic blues groove but then erupts into all out fuzzed out heaviness enhanced by some blistering guitar work from Nic and a superbly pitched vocal from Vince. "W?AT O.D." borrows a "Master of Reality" era type Sabbath riff and marries it with a vocal that carries a few characteristics usually associated with Clutch's Neil Fallon while "Momocerotis" finds  Godhead Lizard dipping their toes into the waters of instrumental heavy psych. Its back to business as usual with "Bending Waters", Vince spouting cryptic lyrics about monkeys, knives and bookshelves against an undulating heavy blues tinted groove that is constantly erupting, quelling then erupting again. It's been a hell of a ride so far but all good things must come to an end eventually and so with sad hearts we finally arrive at final track "Gates of Kurnugi" a throat grabbing blend of lysergic ambience and full on pure rock fury that in its quieter moments carries a reflective soulfulness but in its louder, heavier moments hits with the force of a runaway train, if there was a world record for how much fuzz and distortion you could possibly cram into one song then "Gates of Kurnigi" would be in with a shout for that title, your speakers/headphones will be screaming for mercy. 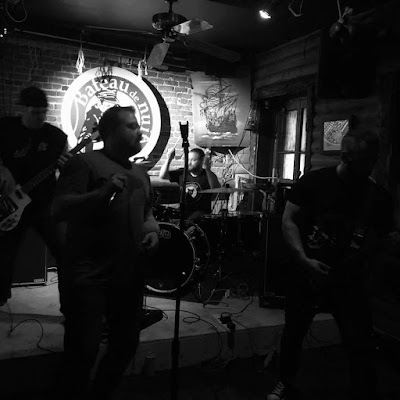 Intelligent cryptic lyrics delivered by a vocalist of rare quality over grooves of powerful loud hard rock are what Godhead Lizard deliver with their latest album and although the band warn us, via the albums theme, that all our chasing of dreams will eventually see us getting closer to the bottom than nearer to the top, the band seem to have climbed somewhat nearer to their peak with "V838".
Check it out .....
© 2021 Frazer Jones
Posted by Desert Psychlist at 12:41