DR. COLOSSUS ~ I'M A STUPID MORON WITH AN UGLY FACE AND A BIG BUTT AND MY BUTT SMELLS AND I LIKE TO KISS MY OWN BUTT ... review

You may have thought that UK heavy metal/hard rock cult heroes Budgie had the monopoly on bizarre song and album titles with their tongue in cheek titled tunes like "Nude Disintegrating Parachutist Woman" and "Napoleon Bona Parts One & Two" and albums like "Never Turn Your Back On A Friend" and " We're All Living In Cuckooland" but Australia's Dr. Colossus have put the Welsh rockers in the shade with their latest release by entitling it "I'm A Stupid Moron With An Ugly Face And A Big Butt And My Butt Smells And I Like To Kiss My Own Butt", which is quite a mouthful in anyone's book.
Now if you are not familiar with Dr. Colossus you could be fooled into thinking that, given it's humorous title and it's Simpson themed artwork (which pastiches the Weedians of Sleep's "Dopesmoker" album), "I'm A Stupid Moron....." might be some sort of comedic venture but you would be very wrong as this is some serious hard rocking shit that'll have you jumping out of your seat throwing devil's horns at all and sundry. 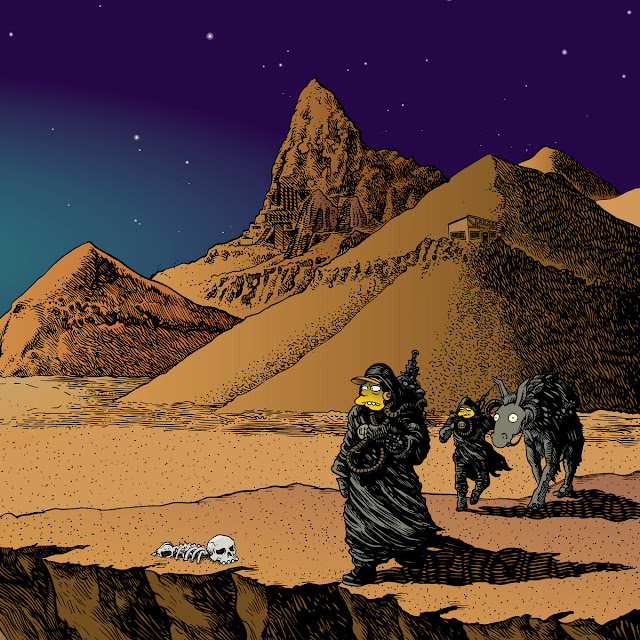 Things begin rocking and a little erotic with opening song "Sex Cauldron" a tune that burst into existence on a relentless wave of gnarly crunching riffage and insistent rhythms and proceeds very much that way until its final note, the songs lyrics telling of a place of ill repute where you can escape all your problems, the singer stating categorically that "we are not talking about love here, we are talking about S.E.X." . If you are hearing shades of early Red Fang and maybe a little Mississippi Bones by now that is not surprising as Dr. Colossus have a similar humour to raunch ratio to both those bands and that raunchiness and humour is no better exemplified than on next track "Pickabar" a song that references an episode of The Simpsons where Homer is supposed to pick up his son Bart from soccer practice but forgets, the song jamming an infectious chugging groove that boasts an equally infectious chorus. "Lard Lad" follows and here we find Dr. Colossus , blending a little proto-doom with Deep Purple(ish) heavy rock, swathes of Jon Lord flavoured keyboard textures whooshing majestically over a strident groove that is made even more enjoyable by it's great lyrics and vocal. "So Long Stinktown" references Homer moving his family away from Springfield to the promised land of Cypress Creek and here we find the band slamming into a groove that bites harder than Santa's Little Helper and begins with the band gruffly harmonizing on a vocal that has the feel of something country rocker Steve Earl might have come up with (that's if Steve Earl was a Simpson's fan of course)."Get Mendoza" is up next and finds the good Dr. mixing things up with a rather impressive array of exotic motifs, neo classical flavoured shredding and dank doomic refrains, the song is also another good example of why it is not always necessary to buy into the bands Simpson themed lyrical content because if you don't always get the sometimes subtle sometimes glaringly obvious references to the shows past episodes you still have the option to rock out to the bands always excellently delivered grooves, and this song has a monster GROOVE! Despite its exotic sounding title "Hummingbird of Bengal" is a song with a southern tinted rock vibe that contains another one of those infectious choruses that will stay with you long after the songs last note has faded into the ether, and how could you not fall in love with a song that uses the lyric "i'm a vegan not a vegetarian". For their last song on "I'm A Stupid Moron ..... " Dr. Colossus go epic with a ten minute plus extravaganza called "Space Coyote" a song that blends the bands penchant for the occasional dank dark heavy refrain with a more restrained dynamic that is no less dank or dark just a touch more melancholic and reflective, the band pulling off this balance with perfect aplomb while still managing to retain that tongue in cheek blackened humour in their lyrics that has run through each and every one of the albums songs. 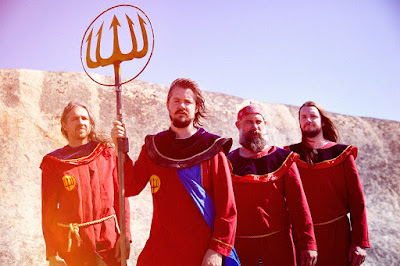 Do not make the mistake of reading the albums unusual title and looking at the cartoonish take on a classic stoner rock album cover and then dismissing this as some novelty record, Dr. Colossus are the real deal and with "I'm A Stupid Moron ..... " they deliver some of the hottest and raunchiest hard rock you are likely to encounter this year.
Check it out ......
© 2021 Frazer Jones
Posted by Desert Psychlist at 04:26