Today Desert Psychlist drags its riff bruised and groove grazed body back to Brazil to introduce you to a band with a slightly daft name who have just released their third equally as daftly titled album. The band in question are Mad Chicken, Filipe Xavier (vocals); Daniel Santos (guitar, keyboards); Michel Custódio (guitar, optical theremin); André Salviano (bass) and Pedro Paim (drums), and the album they have just released goes by the name "Chicken of the Grave" 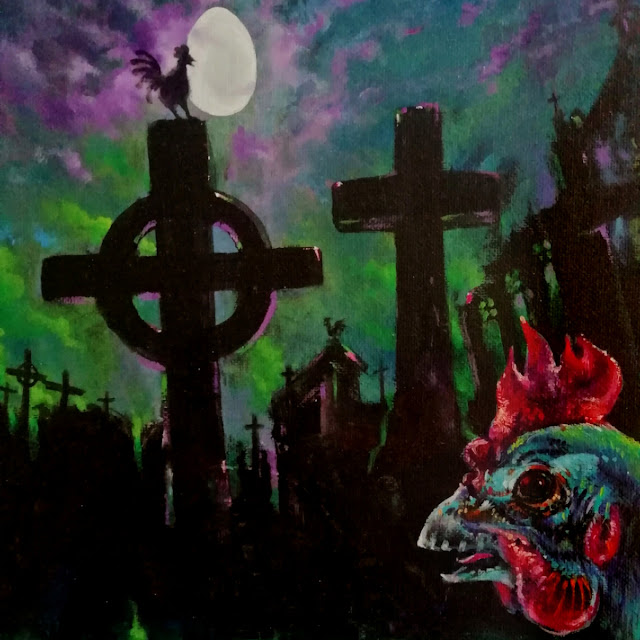 "Chicken of the Grave" is a superb album packed with all the elements you would expect a great album to possess, it has riffs it has melodies it has skillful musicianship and it has great vocals but at the same time it is also a slightly strange album. Why is this we hear you screaming, well let us tell you..... "Chicken of the Grave" begins life with "In The Pit" a song any stoner rock/metal band worth their weight in riffs would be proud to call their own, a song built around heavily distorted guitar refrains and industrious rhythms fronted by gritty angst ridden vocals. The band then follow this up with "Devil Within" a song that follows a similar path to its predecessor but this time is touched with a little proto-doomic flavoring. It is now that things get a little strange, after showing us what a great stoner rock band they are Mad Chicken then decide to go all alt-rock/grunge on us with " Lies In Your Head" a song that could have easily been written by Alice In Chains or Soundgarden, its quiet /loud//quiet dynamics augmented by slurred guitar refrains and  a vocal that is almost the polar opposite of what has gone before. Mad Chicken stay in grunge mode for next track "Self Service Dialogue" its intro of screeching feedback making way for another groove that swells and dissipates with an unerring regularity. "Fake Model Life" mixes its stoner with its grunge to create a cocktail that'll quench the thirst of fans of both musical disciplines while "Spellcaster" finds the band adding bluesy shades to their already quite colorful musical palette. The proto-metal/doom of "Devil Within" returns for "War In The City" a song that carries the cryptic line "everyone is killing but no-one's has a gun" and jams a groove so infectious it should be classed as a disease. It's back to the grunge for "Endless Storyline" a superbly executed alternative semi-ballad that to Desert Psychlist's ears carries a little Stone Temple Pilots in its musical construction. "On The Edge Of Reason", an instrumental piece with orchestral leanings follows and to be brutally honest adds nothing much to the album but is nonetheless a pleasant enough distraction. "You Better Quit" revives the Alice In Chains vibe explored on "Lies In Your Head" but twins that vibe with a vocal that is probably closer to the late Soundgarden vocalist/guitarist Chris Cornell's impassioned howls than it is to AIC's Layne Staley's melodic croons. Final track "Asteroid Belt" then sees Mad Chicken blending together elements of stoner rock and grunge and topping the resulting mix off with touches of heavy psych and space rock. 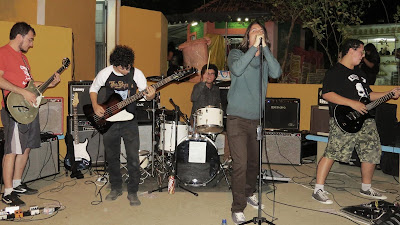 Blending alt-rock/grunge with stoner/hard rock and metal is nothing new but usually those bands working in the this field tend to mix the two into a hybrid of both musical genres, the difference between Mad Chicken and those other bands however is that Mad Chicken divide their grunge from their stoner to such a degree that at times it is almost as if you are listening to two different bands. Now this could result in a very disjointed album but strangely this is not the case with "Chicken of the Grave" in fact it is this duality that is the albums biggest selling point.
Check it out ....
© 2021 Frazer Jones
Posted by Desert Psychlist at 13:49