Desert Psychlist's love affair with Philadelphia's Heavy Temple began when we first stumbled on a YouTube video of a demo for the bands song "Unholy Communion", the songs eerie atmospherics, low key dynamics and almost tribal/ritualistic/spiritual vibe struck a chord deep within us that has been resonating ever since. Heavy Temple, it has to be said, have never been the easiest band to follow from afar, there have been numerous line up changes over the years and despite being a constant presence on the live circuit (pre-Covid) their recorded output has been sporadic to say the least having only released one other EP "Chassit" (2017) and a split with Wolfblood, "Split From The Black Hole" (2020), since the release of their excellent three song debut "Heavy Temple EP". The one constant through all the various line up changes and releases has been bassist/vocalist and main songwriter High Priestess Nighthawk, Heavy Temple has always been her baby, her vision, her reason for being and this year she has once again rejigged her troops, recruiting in Lord Paisley on guitar and Baron Lycan on drums, to bestow upon us another chapter of her bands story with a debut full length album "Lupi Amoris" (Magnetic Eye Records) a stunning collection of tunes tied together by a fairy tale theme. 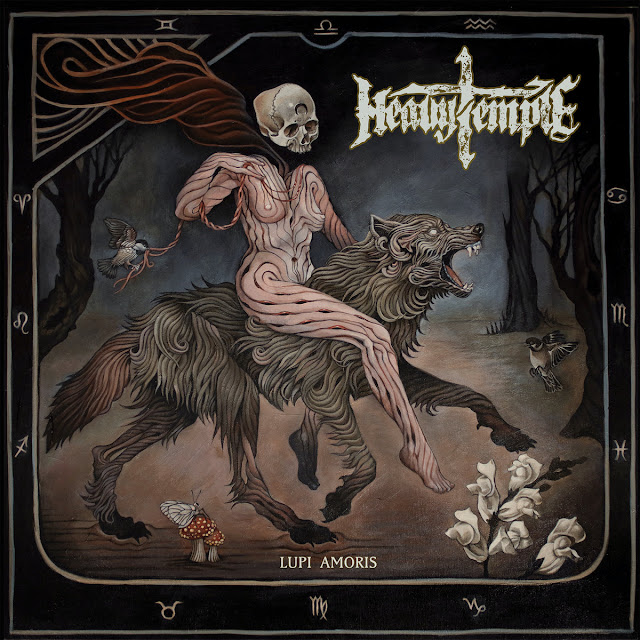 "A Desert Through The Trees" opens proceedings and given that the albums theme is loosely based around the traditional children's tale of Little Red Riding Hood we were a little confused as to where a desert might fit into that scenario but then when we started to think about it we came to the conclusion that a desert doesn't always have to mean a sea of sand and sun blasted landscapes and that the desert in this piece could also refer to a place of abandonment, an area situated deep in a forest where no one goes and nothing will grow. Having got that particular bee out of our bonnet lets move on to how this works musically and WOW does this work! High Priestess Nighthawk gets the ball rolling with a heavily effected circular bass motif played at a rate just above mid tempo which is then joined by Lord Paisley's guitar and Baron Lycan's drums in an infectious proto-metallic groove, the High Priestess then enters with her vocals, the introduction of her dark edged strong melodic voice sees the band  take a sharp and unexpected turn into slower more stoner doomic territory, this transition from one dynamic into another is seamless and mind-blowing and literally sent shivers of delight shooting up and down our spines the first time we listened. "The Wolf" follows and opens with Lord Paisley applying liberal pressures to his wah pedal before fading out and allowing the High Priestess to interject with a deep liquid bass line, his Lordship rejoining her with Baron Lycan in tow to take the song into a groove that sits somewhere between proto-doom and heavy stoner rock. Next up to the plate is "The Maiden" a song that finds the band almost (but not quite) dabbling in a little post-rock texturizing during its initial stages before the song morphs into a runaway metal gallop pushed hard by Baron Lycan and decorated in a slightly brighter sounding vocal from High Priestess Nighthawk, the icing on this particular cake however is the absolutely stunning lead work from Lord Paisley. "Isabella (with Unrelenting Fangs)" finds the band initially back in familiar doomic territory spicing up that doom with touches of bluesy swagger however things take a drastic turn at around the halfway mark and we are suddenly plunged into a world of dissonant noise, structured heavy psych and cosmic blues that although when written down might sound slightly schizophrenic and unworkable is, in execution, absolutely stunning. Last song of the album. "Howling of a Promalthion", is a sprawling instrumental that routinely shifts from hard rock to heavy psych while touching base with doom, prog and much, much more along the way and features some seriously impressive performances from all involved. The song also serves as a good marker to how far the High Priestess has come over the years not only as a musician but also as an arranger and songwriter, her skills in both departments having moved up to whole new level while the musicians she has surrounded herself with for this project are some of the best she has worked with. 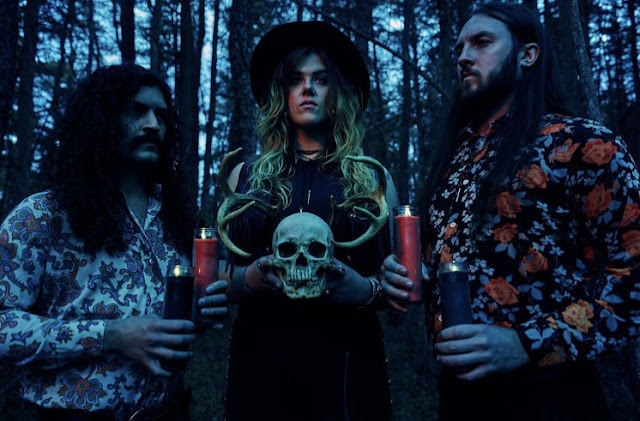 How long we will have to wait for the next Heavy Temple release is anyone's guess, the High Priestess Nighthawk is not known for rushing into anything, she likes to take her time and get things right, What can be guaranteed though is that whatever this band, or future versions of this band, release next will not be something just thrown together and served half baked it will be something cooked to perfection as is the case with "Lupi Amoris"
Check it out ....
© 2021 Frazer Jones
Posted by Desert Psychlist at 00:55