Ukraine's Mist Tower, Artyom Matiienko (vocals); Alexandr Hodosevych (guitar); Andrew "djentle.man" (guitar); Yaroslav Starovich (drums) and Simon Buzzkeeper (bass) describe themselves as a band who gathered together to "smoke and play music", well we are not close enough to the band to comment on their smoking claim (although we suspect its true) but given that Desert Psychlist has just given the bands debut EP "Obsession" a very satisfying and enjoyable spin we can verify that the playing music part of that statement definitely holds water. 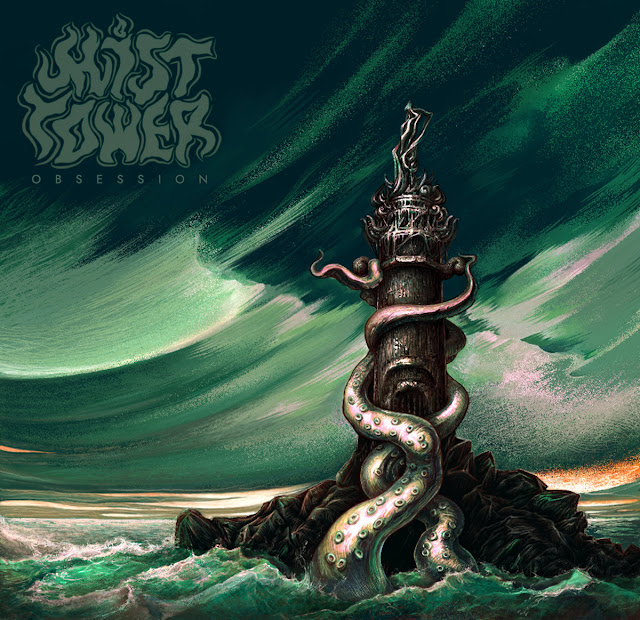 "4th of July" kicks things off with big swirling riffs interspersed with cleverly placed spaced out guitar textures and is decorated with a sneering vocal that for split second had Desert Psychlist wondering if Brit-rock stalwarts Oasis' front man Liam Gallagher had changed his name and moved to the Ukraine, such is the similarity in tone. There is nothing Oasis like about the music behind that voice though as Mist Tower are probably closer on this song to an early Elder than they are the Manchester Brit-rockers albeit with a little more doomic spatial awareness. "Pandemic" follows and poses a bit of a question as here we find Mist Tower ramping up the doom quotient as well as the heavy psych but twinning those elements with a vocal totally different in tone and execution to the albums other tracks which beggars the question was this song recorded separately from the rest of the album and added as an after thought or had the singer just not smoked enough prior to laying down his vocals, either way its a damn good song. Those slightly  sneered vocal tones return for "Devil's Knife" and are combined with a groove that is a little less intense than what has gone before, still heavy but just not as dark while "Vibrations" finds the band bringing a little lysergic haziness into play and building up the atmospherics, the two different and heavily effected guitar tones playing off against each other just before the close of this song is mind-blowing. The EP closes with "Kolodyaz" a scintillating instrumental that builds its part up slowly layer by glorious layer until reaching a peak of psychedelic doomic splendor and then slowly making its way down again. 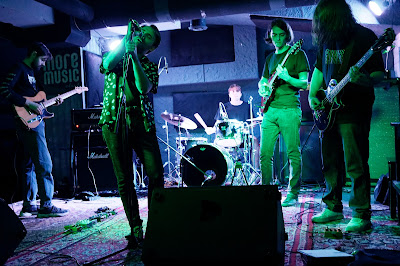 More a mini album than an EP "Obsession" is a collection of five songs that blends elements of heavy psych and stoner metal together with doom but does so without getting overly dark or dense, the band achieving this by allowing plenty of space within the compositions for them to breathe, still keeping things heavy but not over compacting everything so it all becomes a relentless dirge.
Check it out .....
© 2021 Frazer Jones
Posted by Desert Psychlist at 01:28