"Hex, drugs and rock'n'roll" is a pretty good twist on an old adage and one that perfectly suits the musical impact of the subject of this review. Witchrot are Lea Alyssandra Reto (vocals/organ); Peter Turik (guitar); Nick Kervin (drums) and Cam Alford (bass) and together they make a noise that is as unsettling as it is brilliant. Born out of doom but sounding unlike any other band working in that genre Witchrot are a one off, a revelation, a band who may have, with their latest release "Hollow" (DHU Records and Fuzzed and Buzzed Records), raised the musical bar for doom so impossibly high that it may have now become unreachable for anyone following in their wake. 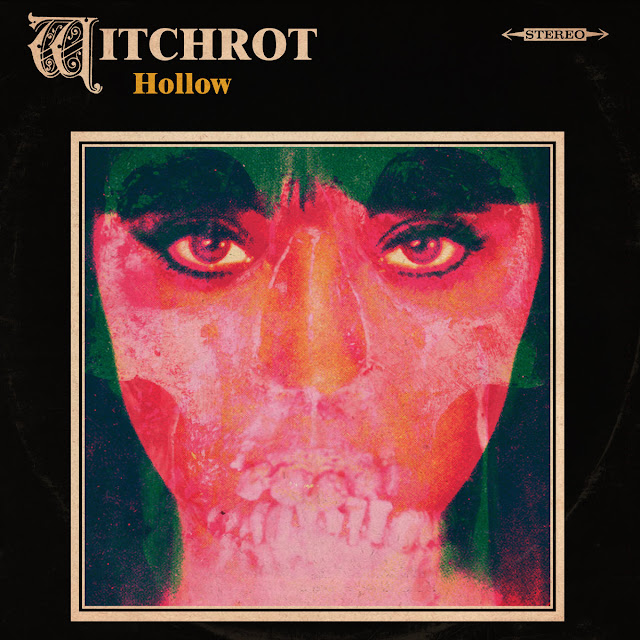 Given the controversy surrounding the bands 2018 announcement that they were calling it a day due to infidelity and death within the band Witchrot sound in remarkably fine fettle on this their "comeback" album, in fact the whole experience seems to have rejuvinated them and inspired them to even greater musical heights. Atmosphere is one of the key elements employed on "Hollow" and nowhere is that element better employed than on opening track "Million Shattered Swords", a song that begins with Reto crooning smoky and lounge like, over a backdrop of ringing guitar arpeggios, sparse effective bass lines and shimmering percussion, then erupts into a volcano of deeply distorted bass riffs and dissonant guitar solo's driven by pounding pummeling drum patterns, the vocals following a similar upward trajectory. Angular and off kilter is the only way to describe the groove of next song "Colder Hands", to paraphrase Star Trek's good doctor McCoy, "this is doom Jim but not as we know it", everything about this song is off the scale, Turik's guitar and Alford's bass weave around each other like two fighting snakes fighting for dominance while Kervin lays down a barrage of percussion that defies description, any slack that is left (and there's not much) is picked up by Reto her dark soulful majestic vocals constantly shifting up and down between the top end of her range and that of her lower register. "Spiral of Sorrow" follows a similar path to its predecessor but this time sits a little closer to a more traditional doom sound, albeit a very twisted version of a traditional doom sound while "Fog", an instrumental that utilizes sampled soundbites, sounds like the sort of thing you might hear playing on your radio while undertaking a roadtrip through the wastelands of Hell. "Devil In Your Eyes" has a quiet/loud/quiet type dynamic that boasts a superb vocal from Reto but is also notable for its twisted bluesy guitar textures and is followed by "Burn Me Down" an up-tempo rocker with sudden descents into doom. "I Know My Enemy" is a schizophrenic mix of doom, stoner rock, punk and alt-rock that shouldn't go together but ultimately does and for the best part works. Title track "Hollow" closes Witchrot's debut much the way they began it... atmospheric, doomic and utterly spellbinding. 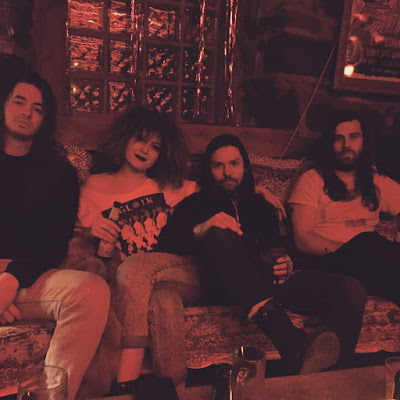 "Hollow" is an album that is anything but, this is an album full to brimming over with good things, where else could you find dissonance and melody sitting so comfortably next to each other, what other doom album will you hear this year that is as soulful and warm as it is dark, desolate and cold. They say opposites attract and on Witchrot's "Hollow" they do not only attract they come together as one, those opposites combining to create a music that follows no rules but its own.
Check it out .....
© 2021 Frazer Jones
Posted by Desert Psychlist at 15:17