Black Sabbath did not really invent doom metal, they certainly inspired the genre with their thick heavy riffs and slower thundering rhythms, but doom as a recognized genre really only came into fruition with the emergence of bands like Witchfinder General, Candlemass, Pentagram, Trouble and Solitude Aeturnus. Using Sabbath's iconic B-movie inspired self titled song "Black Sabbath" as their blueprint these bands tuned their guitars down low, slowed down their rhythmic patterns and in doing so added to their sound a cloying atmospheric that is still the norm in doom music to this day. Vocally and lyrically however things have changed quite dramatically since dooms early days, where once powerful clean vocals, often sang in semi operatic tones, were the norm now doom is often the territory of demonic screechers, gutteral growlers and rabid roarers, where lyrics once had a Mary Shelley. Bram Stoker Gothic novel type vibe now they are inspired by movies like Hellraiser and Event Horizon. Germany's Wheel, Ben Homberger (guitar); Arkadius Kurek (vocals); Marcus Grabowski (bass) and Carsten Jercke (drums), do not buy into this new doom model their doom could well be described as "epic", "traditional" or "old school", a type of doom that is getting increasingly rare but is just as relevant and enjoyable today as it ever was, something you can discover for yourselves by giving their latest release "Preserved In Time" (Cruz Del Sur Music) a spin. 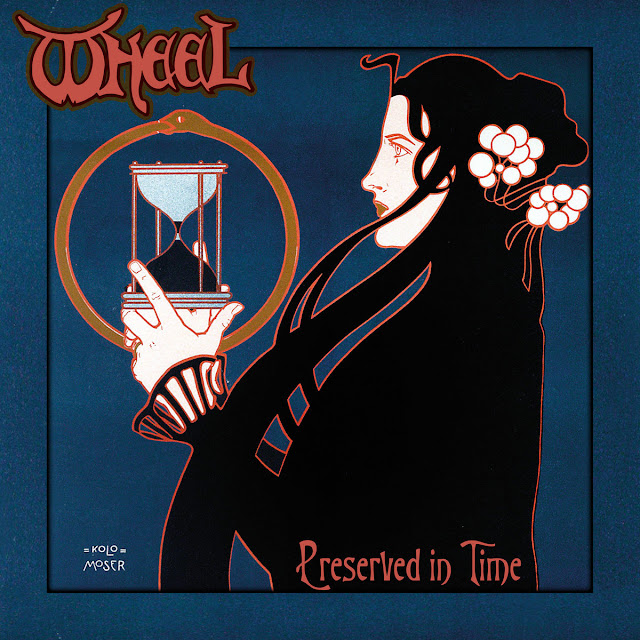 You could not want for a better opening track than "At Night They Came Upon Us" its eastern guitar motifs interspersing a series of chugging doomic refrains is decorated in a vocal that is pure "old school" in tone and execution, Kurek's melodic slightly operatic voice is pitched to perfection and sits perfectly in that "Goldilocks Zone" where it compliments the grooves surrounding it rather than overpowering them. "When The Shadow Takes You Over" follows and has a melancholic vibe, more a torch song than a ballad it boasts an incredible vocal from Kurek as well as some stunning brief but effective soloing from Homberger. "After All" is what could be described as a list song that finds Kurek lamenting, in mournful tones, a loss against a backdrop of mind-blowing atmospheric doom driven by Jercke's thundering and industrious drumming, anchored by Grabowski's rumbling deep bass and given wings by Homberger's crunching reverberating riffs and swirling solos. "She Left In Silence" thunders along on one of those dank, dark and powerful grooves that reminds us all why we fell in love with doom in the first place while "Aeon Of Darkness" contains all the necessary ingredients to underline the reasons why we are in love with the genre still. "Hero Of The Weak" ramps up the doom both atmospherically and dynamically and adds a little theatrical vocal dramatics to the equation, Kurek adopting a darker grittier tone to his voice and even trading off vocal licks with some "new doom" style guttural intonations. Final song "Daedalus" revives the eastern themes visited on the albums opening track but this time we find the band blending those themes with a more undulating musical attack the songs groove ebbing and flowing between full on and  thunderous and restrained and melancholic, huge dark crunching powerchords regularly making way for reverberating arpeggios and swirling solos, pounding pummeling drum patterns replaced by shimmering an intricate percussion, growling bass riffs that rumble and roar suddenly becoming liquid, languid and fluid while the vocals range from a humble croon to an impassioned aria, it's mind-blowing stuff!

If you were brought up on the post-Sabbath doom of Candlemass, Trouble and their ilk and have a hankering for those days when vocals soared and swooned with a power and clarity only usually associated with music of a more classical leaning then Wheel's "Preserved In Time" is perfect for you, if on the other hand you were too young to have witnessed those early days of doom and are wondering what all the fuss was about then this is a great place to start and then work your way backwards.
Check it out .....
© 2021 Frazer Jones
Posted by Desert Psychlist at 11:42