Once a duo now a trio Portland's LàGoon have come a long way since the release of their debut "Grim Ripper", the band formed by guitarist/vocalist Anthony Gaglia and drummer Brady Maurer have, since their formation, consistently delivered the goods with their skateboarding culture inspired blend of garage rock, stoner fuzz and doom, how though will the addition of a new member impact on that sound? Well the answer to that question is not too much at all, the bands overall attack is still as raw and uncompromising as ever and Gaglia's caustic guitar tones and distinctive vocals are still the bands biggest selling point, however what new member Kenny Coombs (bass) does bring to the bands sound is more depth and growl and his inclusion also allows Gaglia more room to express himself through both his guitar work and his vocals, something that can be witnessed first hand by giving the bands latest release "Skullactic Visions" a listen. (Interstellar Smoke Records [Vinyl] and Forbidden Place Records [CD & Tape]). 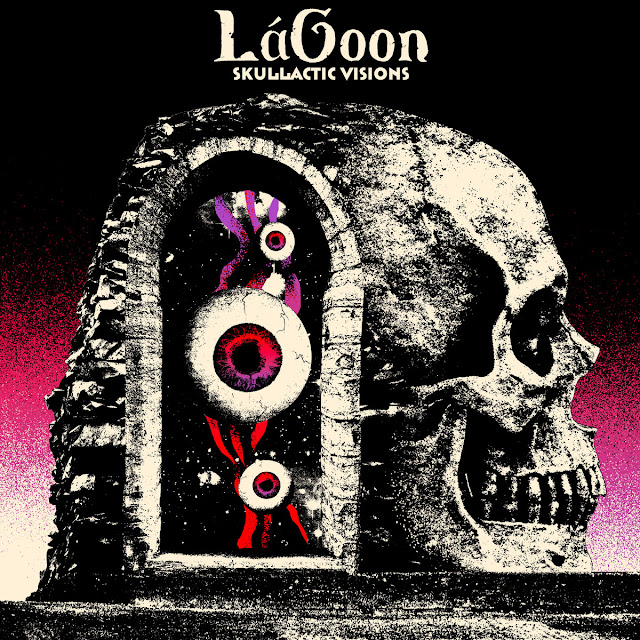 You expect a little untamed noise when listening to a LàGoon recording and that is exactly what you get right from the off with first track "Cold Smoke" its intro of dissonant guitar noise curtailed by a sigh of relief and a shout of exasperation heralds in a groove that is part punk, part stoner and part garage rock, it is a sound you would expect to hear from this band but what you might not be expecting is the chunky bottom end Coombs bass brings to the party, "Beyond The Trees" follows and finds LàGoon donning their doom caps with a groove that is not so much plodding but is definitely in that ball park. Gaglia tailors his voice to bring a more sinister tone to the proceedings while his guitar work takes on more bluesy flavors, as the song reaches its close the band break into an up-tempo stoner/hard rock type shuffle with Maurer and Coombs expertly holding down the groove while Gaglia takes off on one of his customary guitar excursions. Title track "Skullactic Visions" has the feel of a sixties pop ballad but not one that you would likely want to sing to your partner, unless you wanted  to watch that partner running to the hills screaming. The song reminded Desert Psychlist of  Welsh surf-rockers Dope Smoker in places, having a similar mantra like vocal approach and a repetitive circular groove. Gaglia gets the chance to put down his guitar and play with his synths for next track "Buried" while "Hill Bomb" sees the band come together for a song that would not sound out of place on an early Alice Cooper album. A dark thrumming chord progression introduces "The Slow Down" a proto-doomic torch song decorated in swirling lead guitar and boasting a superb half spoken half sang vocal, atmospheric and yet at the same time trippy the song is Desert Psychlist's favourite track on "Skullactic Visions" by a country mile.  LàGoon sign off with "Final Ride" a soaring instrumental that not only shows off Gaglia's skills as a guitarist but also throws a well deserved spotlight on Maurer and Coombs,  Maurer's drumming is a mixture of loose abandonment and military tightness, his style unconventional but highly effective while new boy Coombs is like the glue holding everything together, his bass lines the magic ingredient that takes LàGoon's sound to a whole new level. 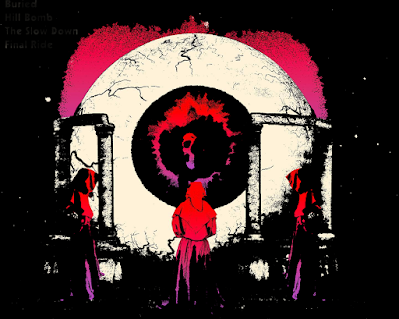 Without a single doubt in our minds Desert Psychlist can announce that "Skullactic Visions" is LáGoon's best release to date and that's saying something especially when you consider how good their previous releases have all been.
Check it out ....
© 2021 Frazer Jones

Posted by Desert Psychlist at 03:32