The best description of an album Desert Psychlist has ever read on any Bandcamp page was written by fellow Doom Charts contributor Adam Walsh who posted these immortal words ... "Played with ample volume, it's guaranteed to loosen stools". The album he was referring to, in his colorful prose, was "Ruins", the debut release of French riffmeisters Dunerider, and to be fair he was not far wrong! 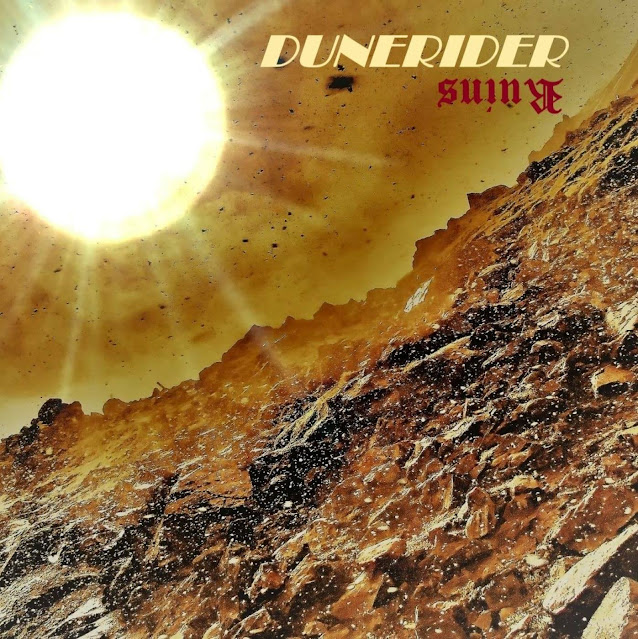 Heavy is a term often attributed to music that's a little louder, a little more grittier and impactful than what is considered the norm, quite often though "heavy" is used as a catch-all term applied to grooves that in reality are not all that weighty but don't fit into any conveniently labeled musical boxes. This is not the case with Dunerider's "Ruins", as Adam Walsh so eloquently put it the grooves to be found on this release are so heavy they put the listener in danger of losing control of their bodily functions. Dunerider's sound is one built on Kyuss' desert rock blueprint of repetitious fuzzed out riffs and  thunderous rhythms decorated with clean minimalistic vocals but where Kyuss would have dialed their pedals and amps to an acceptably heavy seven or eight Dunerider dial theirs to an earthshattering, ear-damaging eleven to create a sound that you can not only hear from several lightyears away but you can also feel in every fibre of your being. Dunerider's riffs on songs like "sandwalker", "death touch wizard" and "last surrender" do not just crunch and crackle they thrum and rumble with a palpable resonance, the band creating a sound that is so heavy it is almost tangible. 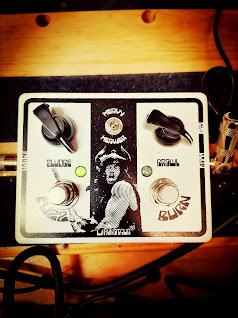 Dunerider introduce us to a sludgy form of desert rock with their debut album "Ruins" but not a desert rock inspired by the remote beauty of deserts but one that reflects the dangers, perils and brutality of those same deserts, the deadly Scorpion hiding beneath the rock, the slow moving venomous Gila Monster hunting at night, the Sidewinder basking in the shade awaiting prey, it's an album that's deliciously dark, damn heavy and according to Adam Walsh dangerous to your health
Check it out .....

Posted by Desert Psychlist at 07:55