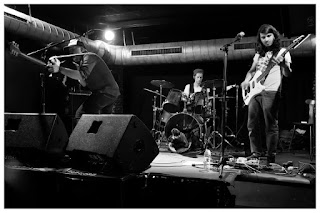 In 2013 a young band from Brussels, Belgium released their first EP, a home made, self titled affair it consisted of four songs of loud stoner rock mixed with a little punky attitude, well written but suffering a little from its DIY production it  nonetheless showed a band full of ideas and band who knew how to pen a good tune. Two years later Tallboy Drop are back with a new EP! 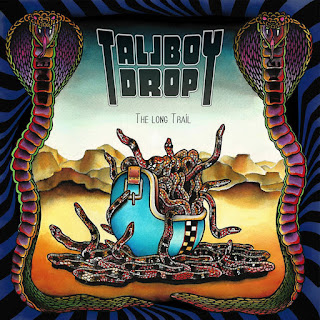 The Long Trail sees Tallboy Drop move away from the punkish naivety of  their first EP shifting instead towards a more traditional stoner sound, a sound that is further enhanced by the addition of keyboards (supplied by band friend Felix) and the professional production afforded to it by the people at Belgium's Noise Factory Studios.
From the gentle opening drone of "So Loud, So Good" through the glorious desert grooves of "When You Cry" to the stoner monster that is "My Mother Is My Sister Too" Tallboy Drop  never miss a trick, filling the three tracks of The Long Trail with delicious fuzzy riffs, solid desert/stoner rhythms, furiously hot guitar solos and topping it all off with wonderful clean vocals. Riffs, rhythms and solos are not the whole story though, Tallboy Drop know how to structure a song, filling all three songs with hooks, melodies and shifting dynamics showing that not only can these guys play a good tune, they can write one too.
The Long Trail is a magnificent example of how, over a space of time, a band can improve and mature and the only criticism I could possibly level at this killer EP is that at only three songs it's too short!
Posted by Desert Psychlist at 12:48