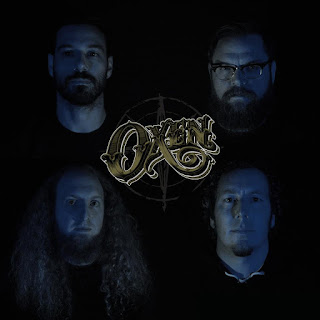 Lead vocalists can be a pain in the butt, pulling all the chicks, getting all the press attention, massive ego's etc. So how does a band get round the thorny problems associated with lead singer syndrome, well in Oxen's case it's simple, you make every member a lead singer........sorted! 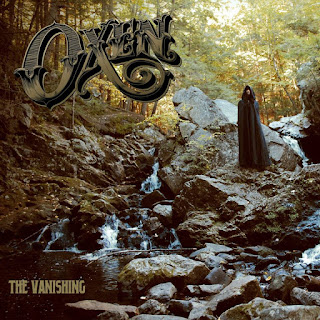 Oxen's approach of multi vocalism pays huge dividends on their new release The Vanishing, with throaty sludge intensity sitting side by side with clean melodic harmonies.
First track "Transmission" explodes out of the blocks like a 100metre sprinter, the twin guitars of Chris Daniele and Ben Reigle spitting out delicious stuttering riffs under which Eric Racicot (bass) and Hans Dalhaus (drums) lay a thunderous barrage of angular rhythms. Vocally the track swaps between  sludgey raw solo leads and gruff clean harmonies that compliment the songs heavy stoner groove perfectly.
Second and title track "The Vanishing" sees the vocals take on a more melodic and clean tone that sits cream-like over a deliciously catchy circular riff. This song has a lighter texture than many of the tunes on The Vanishing but works well within the context of the album.
The rest of the album ebbs and flows beautifully with huge distorted walls of sound counterbalanced against ever shifting vocal displays, highlights being the sublime "See Me Scream" and  "Colour Out Of Space" the former a slow burning track that could almost be called a ballad, if it was not for the bellowed sludge vocal, and one that sees Dalhaus shine as he adds intricate fills and shimmering cymbals to his already impressive drum chops. The latter is a wonderful blend of space rock and sludge metal peppered with incendiary guitar work from Daniele and Reigle, the two guitarists going toe to toe laying down unison riffs and trading scorching solos and fills.
If you like the both the early heavy sludge of Baroness' Red album but are also partial to the lighter touch of their Yellow & Green album then Oxen may be the band for you.

Posted by Desert Psychlist at 13:44