Ricardo Marliere, guitarist of Brazilian prog stoner band Pathos, is a very insistent man, Ricardo has been bombarding me via various forms of social media to take a listen to his band. Well today his persistence paid off and I finally relented and took a listen........ WOW! 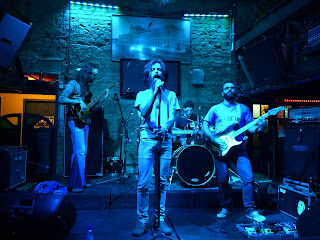 "Elixir" is a concept album and although  I can hear some of you reeling with disgust at the word "concept" fear not, the seven songs that make up "Elixir" are more than able to stand up on their own outside of their conceptual theme. 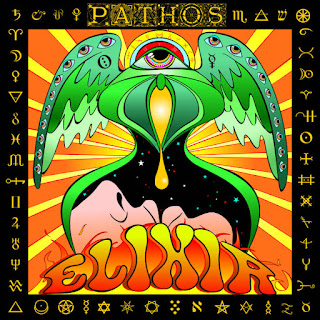 "Portal" opens Elixir and is a stunning slab of stonerized bluesy guitar pyrotechnics that begins quite gently but then explodes into a flurry of distorted bass and guitar jams driven by solid precise drumming from Hugo Moutinho.
"Haunted Vision" is next up with Marliere and bassist Lucas Guida delivering a peach of a riff, fuzzed to the max and filthy with distortion. Vocals then enter the equation, smooth, clean, melodic and with no hint of an accent João Pedro Vieira's voice has a tone and delivery that brings to mind, UK 70's hard rockers, May Blitz's Jamie Black. In fact the whole of "Elixir" sounds as though it was recorded by one of those early 70's bands you find on youtube , you know those ones that never quite made it to the top, due to bad management or in-band politics, but nevertheless produced music of a quality and depth that still stands up today.
A perfect example of this is next track "Sophie" a beautiful mix of early prog melodic complexity and 00's gritty stoner psych that introduces a little flute colouring to the Pathos's sonic cannon and ends with a scorching guitar wig-out.
"Untitled (formally known as The God)" is a mini opera split into three acts that sees the band excel themselves both musically and lyrically. Time signatures shift seamlessly between the acts with Guida's bass and Moutinho's drums being especially effective throughout, bridging the gaps between the three movements with fluid lines and percussive dexterity. Vieira is on fine form too, his vocal tone shifting from melodic croons to impassioned wail and employing subtle changes of tone on each act to enhance the "opera" effect. Marliere's guitar tops everything off with a mixture of hard distorted riffage and textured  six string colouring, going from a wall of fuzz one minute to intricate gentle noodling the next and all in the blink of an eye, incredible.
"Ankh" kicks off all heavy and full of bluster then shifts into ballad territory. light and gentle with Vieira's voice taking on a sweet fragile edge then BANG! we are back to the heavy stuff with Marliere laying down some stunning, effect laden, guitar fire. Listen for some lovely bass fills from Guida too.
The next two tracks "The Wanderer" and "Sequel" see Pathos throw  a little diversity into the mix, the former a mix of all of the above but with a little funkiness thrown in for good measure and the latter a jazzy little workout that includes a trumpet solo, a tone poem and an absolutely delicious guitar solo from Marliere. Both tracks show that as well as rocking out Pathos can SWING!
"Elixir" is, on the whole, a stunning album full of little twists and turns that'll have you discovering something new in its grooves every time you play it, its also an album I might not have heard if it was not for Ricardo Marliere's stubborn dogged persistence ...... Thank you Ricardo
Posted by Desert Psychlist at 12:39