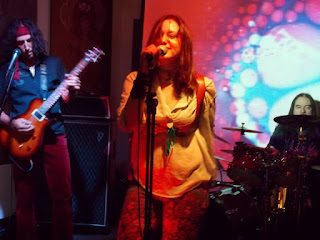 Psychic Dose have been teasing us for a little while now, drip feeding us snippets of their occult/retro rock grooves via Bandcamp, whetting our appetites slowly and deliberately, working us up into a frenzy for the day a full album would be released. Well that day has arrived and debut album Satyrnalia is finally here for us all to hear.....but was it worth the wait?
Well the answer to that question is a resounding yes! 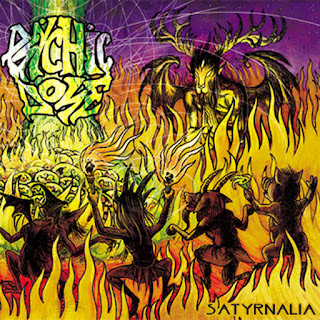 Psychic Dose take a pinch of Royal Thunder's bluesy stoner, a spoonful of Witch Mountain's retro doom add a smattering of Purson's pop/psych sensibility and sprinkle it all with a healthy dose of fuzz and distortion, creating a sound that is familiar but wholly their own.

Satyrnalia opens with "On Hooves I Ride", a chugging mid paced rocker that's catchier than head cold, I defy you to stop your foot tapping along to it's infectious hard rock grooves and hooky riffs. The track is further enhanced by the slightly sinister, witchy rasp vocals of Amanda Howell, her malevolent delivery giving the tune a dark doomy edginess.
The following eight tracks follow in much the same vein. Bluesy doom grooves and angular occult rhythms are driven by a powerful engine room of Aaron Beauregard on bass and Mino Mercurious on drums and sprinkled with scorching guitar tones from Andrew Costantino, the three musicians creating a wall of razor sharp stoner noise over which Howell lays her eerie, unique vocals. Songs like the awesome "Lord Of The Trolls" with its backward recorded intro and "Tying The Wind", all folky acoustics and with a slightly medieval feel, show a band who are not bereft of ideas and a band who promise much for the future.