In 2012 Mara debuted their first EP on Bandcamp. three songs of traditional metal and doom, a little more Grand Magus than Graveyard but with a groove that would appeal to fans of both ,it promised good things for the future. Two years later and Mara have at last delivered on that promise with their self titled full album "MARA" 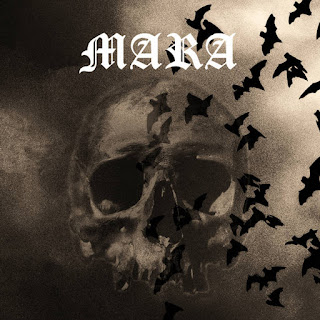 "MARA" is made up of seven songs three of which "Greed","Extinction" and "Possessed" appeared on 2012's EP. Remixed ,reworked the three songs take on a whole new life here being sharper, crisper yet losing none of the sleazy dirtiness of the originals. "Greed" especially benefits, it's heaviness ramped up to eleven going straight for the throat by losing the slow psych build up of the original and just going straight into the riff.
The four new songs stand up well if not surpassing the older tunes, "Maran" opens the album with a deliciously heavy Sleep type riff that shifts into a NWOBHM groove, swaying  back and forth between the two through to the final chord. "Thunderdrive" unleashes Mara's Sabbath side, not by the use of Iommi type riffage but by the use of  Ozzy -like melody in the vocals. "Apocalypse" is a monstrous track that opens with a thunderous drum intro segueing into a  series of delicious swinging (The)Sword type riffs, heavy and head noddingly infectious and enhanced with  slightly more aggressive vocals. "Turn The Tables" is for me the highlight of "MARA" its uber heavy riff circling over and around massive rhythms laid down by the excellent engine room of drum and bass. Vocals are melodic and once again swing with an Ozzy-like meter, counterbalancing the heaviness of the guitars with a dark delicious sweetness. In and out of this maelstrom of noise the lead guitarist lays down some stupendously majestic solos and licks, borrowing from Iommi but also stamping his own style and tone to his fretwork.
Mara are not re-inventing the wheel with their new album but if after reading this you shoot over to Bandcamp and hit the buy button you will, for whatever you decide to pay, be getting some of the finest trad. metal/doom released this year.
Posted by Desert Psychlist at 13:16