As an Englishman who knows no other language than my own, it often surprises me that I can get so much enjoyment out of listening to bands who sing in their own native tongue........then again its not always about the lyric sometimes its all about the GROOVE! 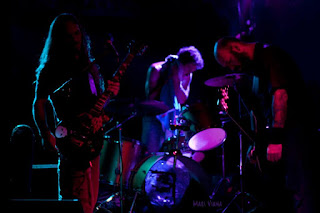 AguaPesada are a trio from Brazil consisting of Ricardo Faller (guitar and vocals), Fábio Domingues (bass) and Fernando Sioni (drums) and have just released their latest EP Troika. 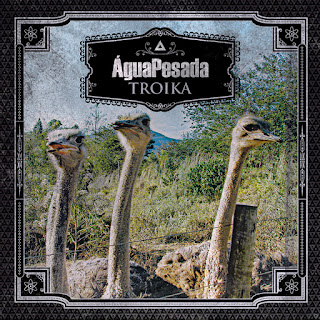 Troika begins with "Um brine ao Iggy Pop (Tribute ao La Carne)" a heady mix of psychedelic atmospherics and heavy stoner/sludge grooves. As with the rest of the EP the vocals are in Portuguese and sees Faller switching from lo-key hushed tones to all out stoner howl, his guitar following suit with long sustained psychedelic notes making way for gritty stoner chords and riffs.  The rhythm section of Domingues and Sioni more than just compliment Faller's vocal and guitar work they drive it, the bassist weaving a tapestry of four string majesty in and around the songs dynamic while drummer both brutalises and caresses his skins with powerful  and skillful stickmanship. By the way the songs title translates to English as A Toast To Iggy Pop ( Tribute To Her Flesh).
Next up is "Enigma de Esquecimento" ( Enigma of Oblivion ) a track that shifts back and forth between spacey psychedelics and hard rocking grooves with Faller's guitar spewing forth mind blowing, effect laden solo's and riffs under which Domingues and Sioni lay a bedrock of stunning rhythmic thunder. Faller's vocal is the icing on the cake here, reverb soaked and moody in places, primal and feral in others, and although I cannot understand a word he is singing, his tone add a dimension to the music that would be sorely lacking if he wasn't there.
"412(Quatrocentos de Doze)" closes Troika with a bang, heavy as a truck full of lead its 4:12 mins are packed full of thunderous riffage and swirling psych guitar effects that both caresses and pulverise in equal measure. Short, sharp and to the point its a fitting end to a stunningly good EP.

Posted by Desert Psychlist at 13:20