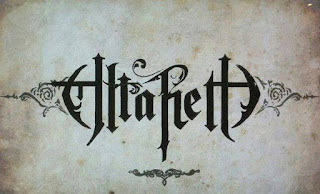 Altareth are yet another band to come out of Sweden's burgeoning stoner/doom scene and are a band who on the strength of their latest EP "Bury Your Mind In Moss" could soon be nudging at the door of respect and admiration that is currently being heaped on the shoulders of fellow Swedes Graveyard and Witchcraft. 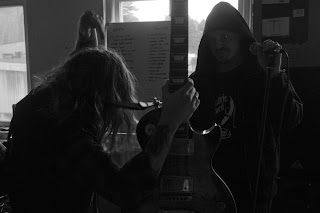 Altareth's sound is a little less refined than those two bands mentioned, a little rougher around the edges and in places almost raw but as they state in their liner notes "The foundation of Altareth is the meeting of heavy riffs and memorable melodies" and  this evident right through the four songs that make up "Bury Your Mind In Moss". 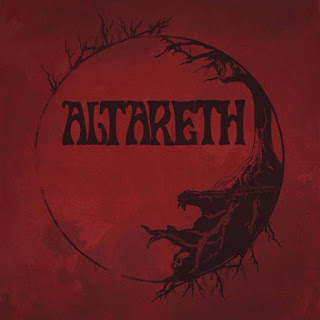 First track "Circles" is a superb example of the above statement. The song begins with a single note guitar motif punctuated by short sharp rhythmic stabs and little bluesy licks which then opens the door for a slammin' main riff, dark, distorted and delicious. Clean, and slightly monotone and with a hint of Ozzy-iness to its delivery, the vocal is powerful and effective and fits hand in glove with the heavy backdrop of doomy occult grooves ."Circles" finishes with a ripping  guitar solo, melodic and with touches of wah pedal, a little more Blackmore than Iommi, and takes the song to its gloriously noisy conclusion.
"Perpetual Haze", the EP's second track sees the vocals get a little more gnarly, a little growly but that is not surprising considering the immense wall of fuzz drenched noise that they have to compete with. Dark, dirty and downtuned the guitars sound as if they are heralding the coming of the horned one, the repeating riffs going around in circles building in intensity until exploding into a cacophony of  noise at its finale.
"Night" follows with a memorable riff that'll have you nodding along like one of those dogs you sometimes see on the back shelves of cars. The vocals revert back to the more melodic Ozzy-ish vibe that were employed on "Circles", a wonderful swinging nasal monotone. "Night" is probably my favourite track on this EP.
Final track "Epicloge" is a slight departure from the norm and sees Altareth donning their experimental caps, Beginning with a lovely acoustic guitar motif, it then segues into a slightly epic doom groove when the electric guitars kick in, only to then shift again into a utterly weird fluttering synth effect that takes the song to its fade. It's an odd one but does show that Altareth  are prepared to step outside the box and mix things up a little.
"Bury Your Mind In Moss" is a really good EP that shows a band who are slowly finding their feet, honing their sound, tweaking their doomy grooves until they find a sound that comfortably fits them. It's not a great EP, too many rough edges, but i'm sure it will only be a matter of time before Altareth achieve that great recording and then take their place on the podium next to their Swedish peers.
Posted by Desert Psychlist at 10:42