Sludgy doomic southern stoner psych metal with its roots in the blues is probably the best way to describe the music of Thunder Horse as the Texas quartet, of Stephen Bishop (vocals/guitar); Todd “The Bird” Connally (guitar/programming); Jason “Shakes” West (drums) and Dave Crow (bass/vocals), are as likely to jam something swampy and bluesy as they are to crunch out dank grooves of dark Sabbathian doominosity and that's all before mentioning all the elements of psych, southern and classic rock the band bring in to play. As you may have realised by now Thunder Horse are not a band to be easily pinned down to one specific genre as their latest release "Chosen One" (Ripple Music) will bear testament to. 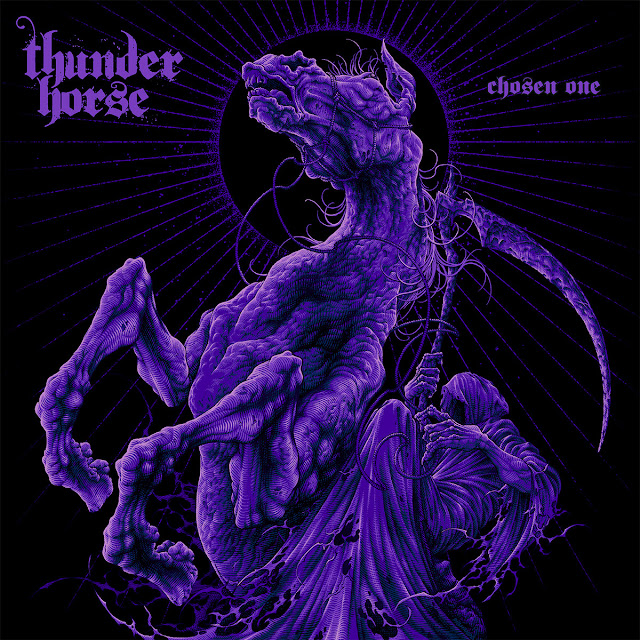 Thick crunching guitar tones and growling bass lines sitting in front of a wall of thundering and industrious drumming is a good way to announce your arrival and as arrivals go they don't come much better than "Let Them Bleed", a song that in the space of just over six minutes tells you everything you need to know about Thunder Horse and their approach to music. "Let Them Bleed" is loud, heavy and dank but weaved into all its loudness, heaviness and dankness are threads of southern rock swagger, classic rock finesse, lysergic otherworldliness and old school hard rock bluster, these threads adding an unexpected "swing" to a groove that is one essentially rooted in stoner doom. The musical approach adopted on "Let Them Bleed" is the blueprint for much of what follows, songs like "Among The Dead", "Rise Of the Heathens", "Song For The Ferryman" and "Halfway To Hell" all have, to some extent,  a doomic undercurrent running through them but all are infused with elements gleaned from a variety of rock music sources, sometimes leaning more towards one sometimes heavier towards another. Vocals throughout "Chosen One" are a mixture of bear-like bellows, powerfully roared harmonies and, on the stark but excellent "Texas", clean melodic crooning, these vocals in what ever guise they present themselves add gravitas to each songs lyrical content especially when twinned with the huge riffs and rhythms they are backed with.
"Chosen One" closes its account with two bonus tracks an extended version of "Texas" and a cover of Traffic's "Dear Mr. Fantasy", the former not so different from its shorter version apart from some added effects, the latter an absolutely stonkin' rendition of a rock classic that stays fairly true to the original but ramps things up by giving the song a grittier, dirtier metallic edge. 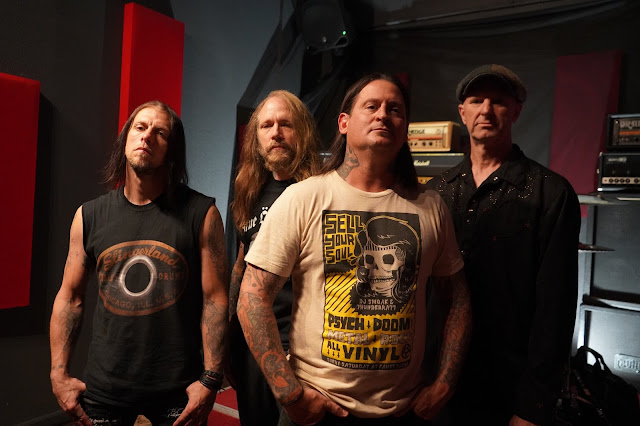 Thunderously doomic yet with a swing you would usually associate with 70's classic rock "Chosen One" is an album that could be argued is a "crossover" album, not crossover in the usual musical sense of the word, where a band is striving for a more commercial sound, but "crossover " in the sense  that it crosses across so many musical styles and forms yet still manages to stay true to its dark doomic roots.
Check it out ....
© 2021 Frazer jones
Posted by Desert Psychlist at 11:32