Desert Psychlist realises that the legend, gracing the top of this blog, bears the words "music from the underbelly of the mainstream" but the subject of this review was once considered so "underground" that he was almost subterranean, so indulge us this once and let us wax lyrical on one of our musical heroes.

We are talking Alice Cooper here, that golf playing, mascara wearing, snake wrestling rock legend who has become so much part of the establishment these days that it would not surprise anyone if he decided to run for a government position and then won it. Once upon a time though Alice Cooper was not a man but a band, a band  consisting of Vincent Furnier (vocals); Glen Buxton (guitar); Dennis Dunaway (bass/backing vocals); Michael Bruce (guitar) and Neal Smith (drums) , back then Alice Cooper was just an invented character, portrayed on stage by Furnier, on which the band could hang their songs about serial killing, torture and sex. During their time together the band released a series of absolutely essential albums, albums that blended the late 60's garage rock of the MC5's,The Stooges and The Nazz with the harder edged heavy rock of the mid 70's while at the same time throwing in unexpected nods to Hollywood musicals and Broadway stage shows. Sadly drink, drugs and punishing tour schedules took their toll on the band and with their front man becoming more Alice than he was Furnier the band finally went their separate ways. Furnier (reportedly) legally changed his name to Alice Cooper and has continued to make albums, some brilliant and some not so, right up to the present day but for many (Desert Psychlist included) he has never quite managed to capture that raw, untamed Detroit sound he had with that classic Alice Cooper line up.,,, well up until "Detroit Stories" that is. 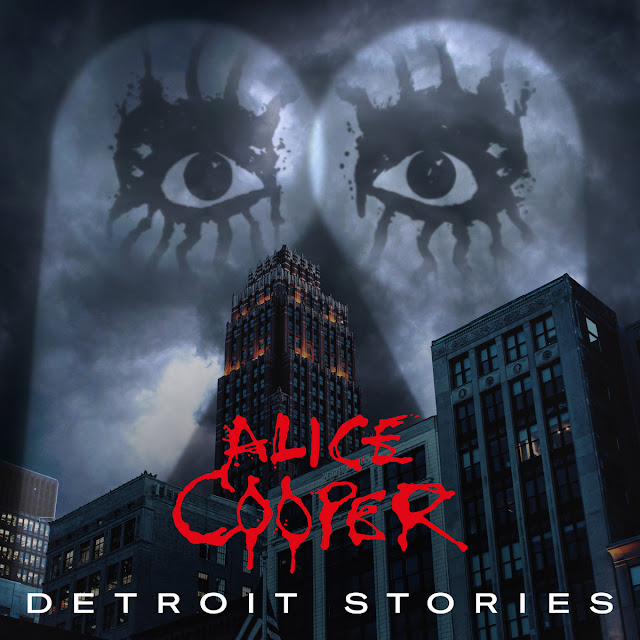 "Detroit Stories" is a mixture of covers and Alice originals recorded with three of the original Alice Cooper Band and a cast that includes long time producer and co-writer Bob Ezrin, MC5 legend Wayne Kramer, Grand Funk Railroad's Mark Farner, U2's Larry Mullen Jr. and blues shredder Joe Bonamassa along with a roster of session musicians, and family members. Now given this huge cast of contributors you might expect Alice's new album to maybe come over a little disjointed and maybe a little sterile but that is just not the case. Much like Rick Rubin did with Black Sabbath, when recording "13", Bob Ezrin has made Cooper look back at his career and has encouraged him to try to re-capture that elusive spark that made those early Alice albums so iconic and magical. On the most part Alice does manage this feat, songs like "$1000 High Heel Shoes", "Drunk And In Love", "Wonderful World" and "Independence Dave" would have easily found a place to call their own on classic albums like "Killer" and "School's Out" their sonic attack and lyrical content replicating that perfect balance of  tongue in cheek humour and smirking garage sleaziness that made those albums such staples in every rock fans record collections. . Of course an album made up of fifteen songs is going to have a few tunes that don't quite hit the mark, "I Hate You" and "Shut Up And Rock" try a little too hard for our liking and the poppy Outrageous Cherry cover "Our Love Will Change The World" sounds a little out of place when placed up against all the sleazy garage rock that populates the rest of the album but of course that's just our opinion, others will no doubt disagree. On the whole though "Detroit City" is a superb album, not Alice's greatest by a long way but certainly up their with some of his best work, which is not bad for a 73 year old  man in makeup who was once accused of  inciting infanticide by a British politician  and whose live shows were described as a "relentless tide of menacing rock music". 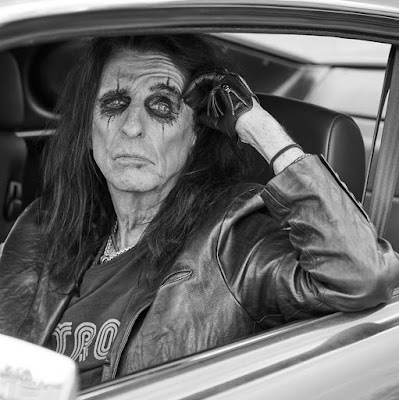 Alice is quoted as saying "There was a certain amount of R&B in the way [the band] played, I didn’t really notice it until I started listening back. If it were [done] in California, it would have been a different sound. But Detroit, I think that’s in the DNA.” Our answer to that is if you have any more albums in you Alice, please. please make them in Detroit!
Check it out .....
© 2021 Frazer Jones
Posted by Desert Psychlist at 15:33