I think most of us can agree that Acid Mammoth's "Under Acid Hoof" was one of the highlights of 2020, an album that blended dooms proto and stoner together with a little psych to create an album that had its own unique identity and for once didn't have to rely on rearranging old Sabbath riffs. 2020 also saw the band finding time to collaborate with Italian doomsters 1782 on a wonderfully dank and dark split "Doom Sessions Vol.2"  Acid Mammoth return this year full of a new found confidence, a confidence afforded them by featuring in so many of the scenes end of year lists, with a new album, "Caravan" (Heavy Psych Sounds Records), and if you thought "Under Acid Hoof" was good wait 'til you hear this little beauty! 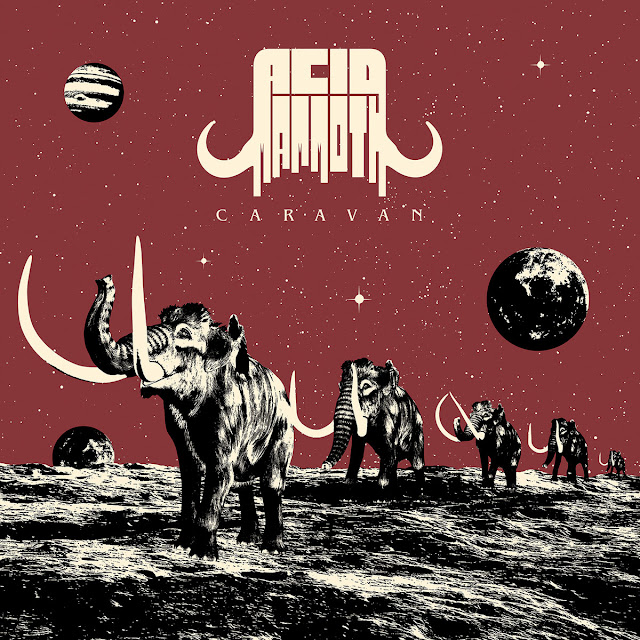 A short burst of maniacal laughter introduces opening track "Berserker" then its straight into the songs slow to mid-tempo groove with the guitars of Chris Babalis Jr. and Chris Babalis Sr. combining to lay down a thrumming dank refrain superbly supported by Dimosthenis Varikos' growling bass and  Marios Louvaris' solid ,almost tribal, drumming, Babalis Jr. providing the songs vocals which are delivered with clean, melodic clarity. "Psychedelic Wasteland" follows, a song that lumbers and lurches under the weight of its low. slow and heavy riffs, the song sits a little more towards the stoner end of the doom spectrum than it's predecessor but is saved from just becoming an excuse for a riff fest by Babalis Jr.'s excellently pitched, almost mantra-like, vocals and the swirling proto-flavoured guitar solo's that constantly weave their way in and and out of the dark miasma of groove that is being laid down around them. "Ivory Towers" treads a similar stoner doom path but this time with a little added haziness while title track "Caravan" seems to borrow a little of that dark stifling relentlessness from their Italian label mates 1782 in that here we find the Acid Mammoth keeping things low slow and murky (in a good way) with just the briefest pushes towards the light. The band round things off perfectly with "Black Dust" an intriguing doomic tome that would border on traditional doom if it were not for Babalis Jr.'s hazy, mellow but powerful vocals and the utter lumbering gait of the rest of the bands musical attack. 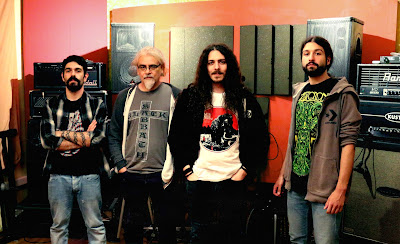 If instead of  Athens, Greece Acid Mammoth had hailed from that epicenter of doom Portland, USA Desert Psychlist is firmly of the belief that this band would be on the lips of every doom fan on the planet, as it is they just have to work a little bit harder to get that same level of recognition, they are however, with "Caravan" most certainly on the right track.
Check 'em out .....
© 2021 Frazer Jones
Posted by Desert Psychlist at 03:06