Russian stoner/doom bands are a little like London buses, you wait ages for one and then two come along together, or at least that's how it feels after just recently finishing a review of Murom based trio Swamplord's new album "Tombstone" only to then turn around and find an album from Tomsk quartet Inhale pop up on my Bandcamp feed. Not that we are complaining though because the bands self-titled debut. "Inhale", is a little dark gem. 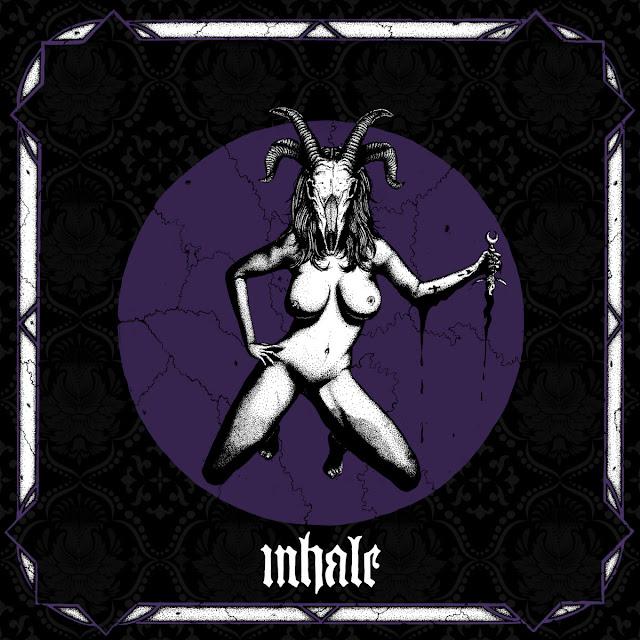 Inhale's sound incorporates much of what we have come to expect from music that comes under the canon of stoner, doom or occult rock, downtuned guitar and bass riffs, thunderous drumming, a mixture of graveled and harsh vocal tones and lead breaks that scorch and burn with a dark fiery magnitude. What you might not expect however is that despite all its the down tuning, thundering and scorching "Inhale" is an album edged in a brightness and sheen not always associated with music of this nature. So what do we mean by that last statement given that doom has a tradition for dourness and dankness, well musically "Inhale" is as dour. dank and atmospheric as you could ever hope for, the four songs that make up Inhale's debut, "Under The Floor"; "C.O.S.C."; "Her Voice" and "The Blackest Eyes" contain all the requisite ingredients we look for in doom but what sets "Inhale" apart from releases in a similar vein is its production, the team behind bringing Inhale's songs to life, Vagiz Bikulov (mixing/recording) and Marshall Fishwick (mastering), have eschewed the usual route of trying to add atmospherics by keeping everything low and murky and have instead opted for a brighter, almost classic rock sound that sees the guitar riffs sound crisper and crunchier while still maintaining that all important low end thrum supplied by the rhythm section. Of course its no good employing the best in the business to sprinkle their magic on your tunes if you don't have those tunes in the first place and thankfully Inhale have those tunes. Inhale's sound probably leans more towards the occult rock end of the doomic spectrum, it's a sound that draws from three of its doomic relatives, stoner proto and traditional, but relies a little more heavily on melody and elements of the blues, hard rock and good old heavy metal to make its impact, and believe us when we say ... its a pretty big impact.

"Inhale" is an impressive debut from a band with a real grasp of what makes for a good "doom" album, the four songs that make up this album are weighty, heavy tomes but are imbued with a "swing" and a "sparkle" unusual for the genre.
Check it out ....