Curico, Chile, the home of Eutanasia (the subject of this review), is a city that has had it's fair share of disasters over the years, the city had to be rebuilt almost from scratch when in 1928 it was more or less wiped out by an earthquake and in 2010 disaster struck yet again when another earthquake badly damaged huge swathes of the city and caused widespread damage, death and injury. Now you might think a band living in a city that is under constant threat from seismic activity might compose songs that reflect that threat but Eutanasia,  Panch Diaz (lead guitar /vocals); Gera Arriagada (guitar); Victor Saavedra (bass) and J. García (drums/percussion), prefer to look further afield for their inspirations, while others in Curico might be looking warily at the earth beneath their feet, Eutanasia, with their debut "Cosmonauta" are looking to the stars. 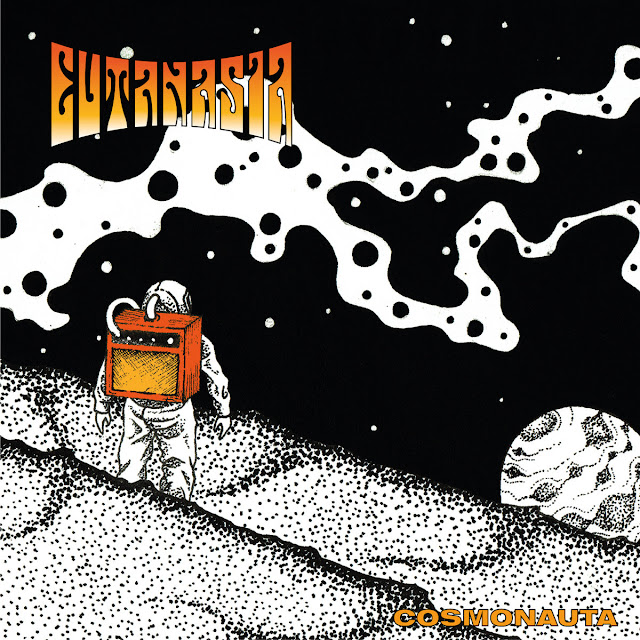 "Vacío Eterno" (translation: Eternal Void) kicks things off with a song built around a strident stoner/desert groove that although nods its head towards Kyuss probably leans more towards Sweden's Truckfighters, the songs fuzz drenched buzzing guitar tones, booming bass lines and tight, solid drumming the backdrop to a vocal (in Spanish) that is strong, clean and ever so slightly aggressive. Title track "Cosmonauta" follows and here we get the first real glimpse of  Eutanasia's more lysergic side the band using the songs desert rooted groove to launch off on tangents into heavy psych territory, scorching guitar solos' weaving in and out of each other while the rhythm section keeps everything anchored to the ground. "Camino Errante" (translation; Wandering Road) is up next, a strident very busy rocker with amps and effect pedals all dialed to eleven, to say the fuzz is strong in this one would be an understatement. To mark passing the albums halfway point Eutanasia offer up "Psiconauta" an enthralling instrumental that rises and falls like waves on an ocean, all crashing drums and raucous riffs one minute, the next ringing arpeggios and shimmering cymbals. "Viajero del Tiempo" (translation; Time Traveler) once again dials up the fuzz and distortion to almost breaking point and boasts not only the albums best vocal but also its craziest guitar solo. Things are brought to an unwanted close (believe us when we say you won't want this album to end) with "Sin Retorno" (translation; No Return) a thundering groove monster spliced with sudden and unexpected plunges into proto-doomic waters, it's impassioned howl as it fades into silence the perfect reminder to re-press play and relive the whole experience over again.

Eutanasia are just one in a long line of superb bands emerging from the South American continent , bands from Chile, Brazil, Peru, Argentina and many more are all constantly churning out quality heavy music, not just in the fields of stoner rock and psych but in all the metal and rock fields. So if you are perusing the pages of Bandcamp or some similar music streaming site and see an interesting looking album cover don't be put off if that album title is in a language that's not yours, give it a listen you might just find a musical gem as smile inducing and as mind-blowingly good as "Cosmonauta"
Check it out ....
© 2021 Frazer Jones
Posted by Desert Psychlist at 15:50