DOOMSTRESS ~ SLEEP AMONG THE DEAD ....review

Desert Psychlist first came across the band Doomstress via bassist and vocalist Alexis Hollada's (aka Doomstress Alexis) other musical outlet Project Armageddon, a dark doomy outfit with a penchant for salting their doom with elements of old school metal. Not long after hearing Project Armageddon's excellent  album "Cosmic Oblivion" Hollada contacted us at Stonerking Towers asking if we would be interested in reviewing a release from her other band Doomstress entitled "Supernatural Kvlt Sounds: The Second Rite", of course we jumped at the chance and found, to our surprise, a band coming from the opposite direction to Project Armageddon …. an old school heavy metal band salting their grooves with elements of doom. A lot has happened since that release with Hollada filling in on bass duties with proto legends Josefus as well as Doomstress getting signed by the prestigious Ripple Music label, the label on which the band have just released their latest opus "Sleep Among The Dead". 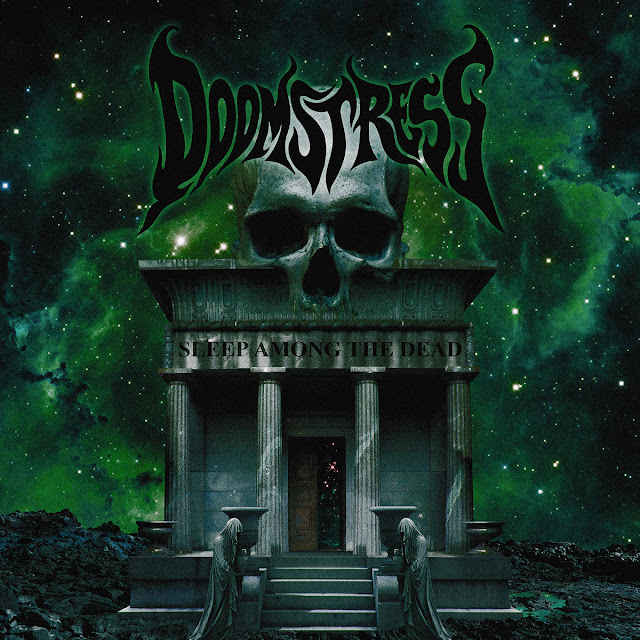 Bassist/vocalist Hollada is joined, in Doomstress, by Tomasz Scull (drums), Matt Taylor (guitar) and Brandon Johnson (guitar) the four musicians creating a sound that references elements from the full gamut of classic metal but then sprinkles those elements with fine dusting of doomic faery dust and occult rock nuance. Desert Psychlist described Hollada's vocals on Project Armageddon's "Cosmic Oblivion" as coming across as a little unique and quirky however on "Sleep Among The Dead" her vocals are strong, clean and in places possess an almost ethereal quality, now whether this is because "the Doomstress" has been visiting a vocal coach or it's that she now has more confidence in her vocal abilities ,Desert Psychlist doesn't know, but her vocals, throughout the albums seven tracks, are nothing short of superb. "Sleep Among The Dead" is that rarest of animals.. a complete album, from "Bitter Plea" through to title track "Sleep Among The Dead" there is not a weak track to be found, but if the push came to the shove and we were forced to pick a favourite then it would have to be "Dreaming Spider", it's achingly beautiful extended intro suddenly exploding into a throbbing proto-doomic groove with Hollada telling us, in melodic tones, of "collecting dew reflecting strings of jewels", the songs crunching main riff offset by shards of subtle guitar colouring beneath which the bass and drums keep things solid, tight and on point. 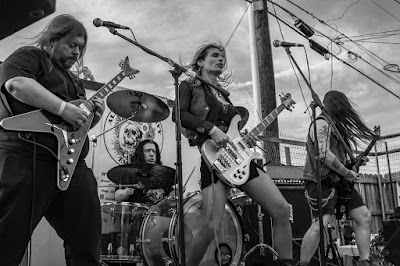 We denizens of the underground rock scene tend to balk of the thought of our heroes taking that next step up to wider audience acceptance but if there ever was a band that could take that step, and deserved to take that step, then our money would be on Doomstress and "Sleep Among The Dead" may just be the album to make that happen.
Check it out ….