Let's take a trip to the bottom end of the South American continent and visit Argentina, a place that for a while now has been churning out more than its fair share of gnarly assed underground grooviness. The band we are visiting today go by the name of Halfaya, Pancho (vocals/electronics), Gonza (bass/vocals), Strips (guitar/vocals) and CJ (drums/percussion), a band who like to call what they do as "weedcore". Now, with the odd exception, Desert Psychlist tends to run a mile from anything attached to the term "core" but Halfaya's debut release "El Paso de Halfaya"(Psycho Records) proves that  the word "core" doesn't always have to rhyme with "bore". 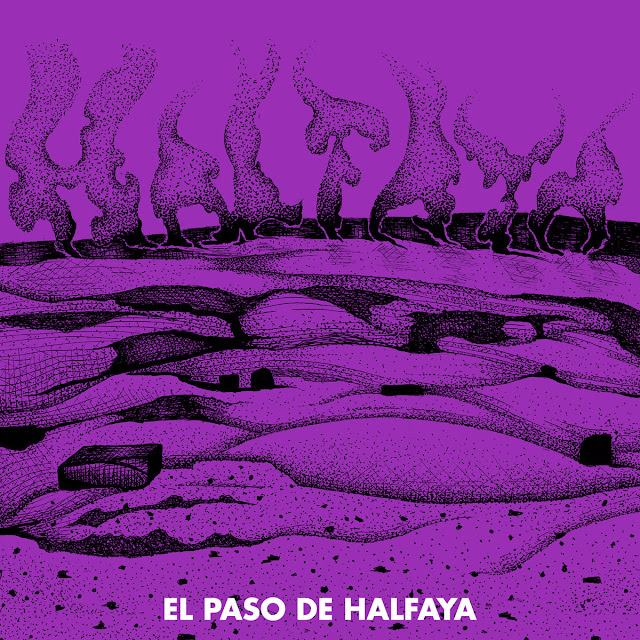 Title track "El Paso De Halfaya", an instrumental, arrives slow and atmospheric with droning electronic effects that are accompanied by a crunching circular guitar motif that gradually builds and builds until finally settling into a juddering heavy proto-doomic/metallic refrain that is as far removed from being "core" as it could possibly get while still remaining in the hard and heavy arena."Vienen Por Vos" follows and apart from a few gnarly vocal inflections there is still no real sign of those "core" elements raising their head, instead we get a heavy stoner outing decorated in grainy fuzz and driven by thick growling bass and punchy, pounding percussion."Miserias" throws a curve ball into the mix, a short moody instrumental that although brief is quite charming and strangely soothing which is something that cannot be said about its near neighbour "Extraños" a short sharp jab of stoner doomic mayhem broken up by moments of thrash like pace, a song where those "core" elements talked about begin to make their presence felt. Next track "Asidero A La Oscuridad" explores more stoner doomic territories its low slow intro building up into a thrumming heavily fuzzed groove decorated with a strong triple vocal attack, the song increasing in pace before finally coming to an abrupt finish."Vencidos" follows and now we do enter the "core" arena with the band hitting a punky hardcore groove with the vocals following suit. "Abduction" closes the album and finds the band dropping their native tongue for English with a song that has a strong political edge, the lyrics telling of "Abduction, Disappearance, Homicide", seemingly a reference to Argentina's "Dirty War" a time when many of Argentina's citizens were rounded up by the authorities never to be seen again. Powerful and doomic with subtle twists in dynamic and pace the song closes "El Paso De Halfaya" much like the album began, slow and atmospheric.

Halfaya may call what they do "weedcore", and there are elements to be found here that most definitely come under the dreaded "core" banner,  however what we at Desert Psychlist prefer to call this is … devastatingly good , powerfully heavy ROCK!
Check it out …..
© 2019 Frazer Jones
Posted by Desert Psychlist at 05:48